Lost Time is Not Found Again. Unless...

Well, the happiness seminar turned out to be even more unhappy than I had imagined. I brought along some Theological Anthropology to keep me amused, but I should have chosen something lighter and less Germanic, because it was too hard to concentrate amidst the babble. Plus I arrived late, so I couldn't even claim a chair in the back row. And the reception was poor inside the building, so no covert talk radio. The horror! A first world problem of the most painful kind.

The presenter was a 350 pound psychologist/stand-up comedian with a voice and delivery eerily similar to Jay Leno. He said everything as if he were Leno being funny, except not a single thing was remotely witty, so it was just irritating. And the wisdom he imparted was on the level of the Sphinx, e.g., "in order to be happy you must avoid what makes you unhappy." 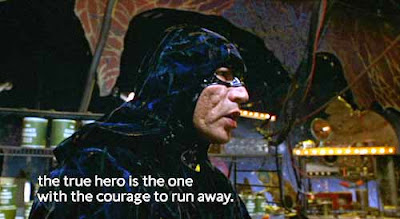 Hey, remember when man supposedly ventured to the moon and planted his flag there? It's a little like God visiting earth and planting his flag here, isn't it? Except it happens everyday; or every Today, rather.

As Balthasar describes it, "'Today' is the present of vertical salvation time," "suspended in and over the horizontal 'now.'" I've never heard it expressed quite that way, in the sense that there are these two sides to every moment, so to speak. Horizontal time necessarily passes away and "cannot be anchored" in anything: it's that slippery thing that is always slipping through our fingers.

But God's visit to earth -- "an event of divine freedom breaking in" -- means there is a kind of vertical anchor and rope. If God is always breaking in and pulling out, it seems that we may reverse the direction of time by "cleaving in love to God," i.e., "to the one being ascending." So we got that going for us.

Just flipping pages here. God not only enters profane time "with all its inner futility," but descends "to the bottom of the abyss of time." Only through this "total passage" through to the bitter end can there be a "reversal of the whole."

In this orthoparadoxical way, "the point of greatest antithesis -- between sinful time run to its end and spotless eternity -- becomes the place of the most intimate loving union between Father and Son." Like us, God plants his flag on a dead rock.

So, now it is as if time isn't just perpetual dissipation and loss. Rather, it has a kind of curvature that bends back toward eternity. Our earthly pilgrimage -- or bewilderness adventure -- is still a "journey in a foreign land," but at least the road back home is no longer blocked.

In the absence of this vertical road back home, then man is not only hopelessly fragmented, but pointlessly so (the two are related, but not identical).

What I mean is that man, being man, is born with "delusions of wholeness." Why? Other animals are already whole, with no awareness of being incomplete or in need of some missing piece of the puzzle. But at the center of man is a big (?!). Now, either there is a reason for that, or no reason at all. And if the latter, what makes us think we can do anything about it? It's just an ontological itch that can't be epistemologically scratched.

Existentialists are surely correct about one thing: in the absence of God, man is indeed a big fat nothing, with no possible meaning or significance other than what we make up. We need to be honest about that, and not recoil from the absolute nihilism of secular atheism.

But the religious view takes that same nothingness and transforms it from meaningless accident to ontological necessity: in the end, we are essentially nothing because we are creatures, not Creator. But that nothing turns out to be everything, because it is not just an abyss but a space and a gap over which there is a bridge.

Now, this bridge is not an "object," but rather, a relationship -- or at least the offer of one. It is that same vertical lifeline alluded to above which completes the temporal circuit. There is the possibility of wholeness amidst temporal fragmentation, such that Today becomes a gift instead of a burden. Unlike yesterday.

[slaps head] Damn! If only I had known.

And the reception was poor inside the building, so no covert talk radio.

It occurred to me yesterday that the best person to run a seminar on happiness would be Prager. It's too bad listening to his show doesn't qualify as a continuing education credit.

In the absence of this vertical road back home, then man is not only hopelessly fragmented, but pointlessly so...

Yes. The times I am most aware of that pointlessness are the ones that tend to bring me closest to despair. It is only the knowledge of the vertical that keeps me from toppling down.

"Existentialists are surely correct about one thing: in the absence of God, man is indeed a big fat nothing, with no possible meaning or significance other than what we make up. We need to be honest about that, and not recoil from the absolute nihilism of secular atheism."

Yeah... but then you can't indulge in what makes you unhappy. Duh!

Julie "It's too bad listening to his show doesn't qualify as a continuing education credit."

In "CE" the emphasis is on "continuing," as in, never-ending sinecure for someone on the public payroll.

It's just an ontological itch that can't be epistemologically scratched.

This is going to change baseball.

Just be glad it's once a year instead of quarterly.

this bridge is not an "object," but rather, a relationship -- or at least the offer of one.