This will be a very non-linear post, so heads-up. It's just that it's a big subject, and I've bitten off more than I can chew, so it will have to organize itself as it's being written. In other words, the whole isn't quite in view, even though I sense it's there somewhere pulling at the disparate threads.

I'm back to thinking about the Dunning-Kruger effect. In particular, this passage on "motivated reasoning" caught my attention:

Some of our most stubborn misbeliefs arise not from primitive childlike intuitions or careless category errors, but from the very values and philosophies that define who we are as individuals. Each of us possesses certain foundational beliefs... that essentially cannot be violated (emphasis mine).

Dunning goes on to say that these organizing principles demand fealty from other opinions, such that "any information that we glean from the world is amended, distorted, diminished, or forgotten in order to make sure that these sacrosanct beliefs remain whole and unharmed."

Sacrosanct. Dunning probably didn't intend that word in the way I'm reading it, but I take it quite literally, as it gives insight into the very nature and structure of modern political religions in which the secular is elevated to the sacred -- or, to be perfectly accurate, the sacred is dragged down into the mud of an unredeemed (and unredeemable because severed from the divine) human nature.

Ironically, political religions are founded on the Christian centrality of the individual, but unmoored from the very Christian principles that ground and give dignity to the individual. Just this morning I read something by Gil Bailie that goes exactly to this.

Entitled THE SOUL IS NATURALLY CHRISTIAN: The Mystery of the Person and the Crisis of the Self in a Post-Christian Culture, it touches on some of the themes of the book on which Bailie is working. You might call them sacrosanct and foundational propositions from and around which everything else is organized, from the macro-cosmic to the micro-personal:

[I]t has become increasingly obvious that the notion of autonomous individuality flies in the face of social and psychological reality. Once the West had made protecting the rights of the autonomous individual the engine of its historical reforms and reconfigured all its institutions accordingly, however, it was understandably in no mood to quibble over the psychological plausibility of what had become its organizing principle.

In other words, culturally we are living with the effect -- personhood -- severed from the cause -- Christianity. Balie quotes Romano Guardini:

The knowledge of what it means to be a person is inextricably bound up with the Faith of Christianity. An affirmation and a cultivation of the personal can endure for a time perhaps after Faith has been extinguished, but gradually they too will be lost.... As soon as the true value of the person is lost, as soon as the Christian faith in the God-man relationship pales, all related attitudes and values begin to disappear.

Again, I want to highlight both the content and the form of this latter statement: for not only is it true, but it entails, shapes, and conditions so many other related attitudes and values that are only true to the extent that they are emanations or entailments of that prior, foundational belief.

The image of rock-paper-scissors keeps breaking into my head... a fable, as it were. Let's say you're an atheistic materialist: your rock is matter and empiricism. Well, the belief in materialism transcends matter, so it's like the paper that wraps around the rock. Transcendence beats immanence! But then Kant comes along with his epistemological scissors and cuts transcendence to ribbons of neurology, just forms of our sensibility. Is there a rock that beats Kant's scissors? Yes: the person playing the game!

Ah, but what is a person? Jumping ahead (or above) a bit, we would say that there is not, nor can there be, any such thing as a person in the absence of God. For our purposes, there is only the irreducible God <--> man dialectic (much like the truism that there is no such thing as an infant, only the infant-mother dyad). This isn't so important for pre-Christian cultures that don't yet know about the ontological centrality of personhood. But:

Christ’s warning to his disciples applies in very real ways and most especially to those cultures which have fallen under sustained Christian influence: “Without me you can do nothing” (Jn 15:5). If they can remain insulated enough, pre-Christian cultures can survive indefinitely. Not so post-Christian cultures. They cannot go back before Christianity, even if they try to do so convinced that they are advancing beyond it.

Once you wake up to personhood, you can't go back to sleep into collectivism. Well, you can, but only in an intrinsically pathological way. Socialism is resurgent among millennials because it is just a symptom of a much deeper soul-pathology, in which Christianity remains, but in an inverted way:

As our formerly Christian culture has declared both natural law and biblical anthropology to be insufficiently solicitous of an individual’s will-to-power, individual “rights” was adopted as the cure for every social ill -- real or imagined.

Alas, however, not only did the assertion of rights become cacophonous, but it soon metastasized into an instrument for silencing, shaming, and punishing those still animated by the religious tradition, moral commonsense, and anthropological realism which first endowed the rights discourse with its moral authority.

Cardinal Robert Sarah has recently written about how quickly the enemies of natural law and Christian anthropology “hurl anathemas at all those who do not follow their line of thought.” Cardinal Sarah referred to this impulse as irreligious secularism’s “theological hysteria.”

Theological hysteria. That's a bingo. We all sense that a dramatic cultural change has taken place over the last decade or so. What is its deeper structure? The left has always been hysterical. But now, thanks to social media and cable news, it is able to crank up and amplify the hysteria 24/7. You've no doubt noticed that the news is no longer the news, but rather, the hysteria of the day. Check out this trivial but illustrative example at PowerLine. Part of hysteria is not knowing one is hysterical, as readily seen in these hyperventilating imbeciles. 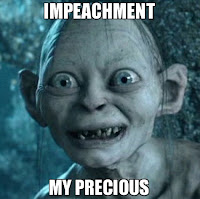 Now, two aphorisms guide this blog: first, that In each moment, each person is capable of possessing the truths that matter, and second, that As long as we do not arrive at religious categories, our explanations are not founded upon rock (Dávila).

Put them together, and we believe that every person, by virtue of being one, has access to the rock-like truths on which to found and secure a properly human life. I would even say that we are entitled to them, in the same sense that our bodies are entitled to food, water, and oxygen. Just as it would make no sense to have a body with no means to nourish and sustain it, it certainly makes no sense to have an intellect that can just as well thrive on lies as truth. If such were the case, it wouldn't deserve the name intellect.

Solid rock. Until we find it and build our lives upon it, we are essentially adrift in the cosmos, even -- or especially -- if we don't realize it. Postmodernism is founded on the belief there is and can be no rock. Their wretched rock is a reckless rocklessness.

Which isn't necessarily a bad idea if one takes it seriously. I am reminded of a Zen story to the effect that when we are born, we are thrown off a cliff with a boulder. Most people spend their lives clinging to the boulder, as if that will change the ultimate outcome. A first step toward enlightenment is to release the boulder.

Now, there are innumerable false boulders -- substitutes for the Rock -- some of them more or less respectable, such as education, doubt, or creativity, others that are harder to redeem, such as narcissism, power (for its own sake), and hedonism.

But the only proper and secure rock can be truth. For example, education in the absence of truth reduces to the tyranny of relativism and therefore power. Likewise, status in a criminal gang is quite different from status in heaven, which revolves around caritas and good works. And creativity in the service of ugliness, sadism, or popularity is just a clever or diabolical way to kill time.

But what if the ground is actually more squishy than petrine? To cite an obvious possibility -- for there can only be two -- what if it isn't an object but a subject? When we think of "subjectivity," we typically think of something that is quite the opposite of rock. When a person dies he turns rigid and re-turns to earth, but so long as he lives he is more of a dynamic flow.

Although this blog likes to found itself upon rock, we have four particular rocks in mind that strike us as deeper than rock; let's call them Gödel, complementarity, intersubjectivity, and the knowledge problem.

First Gödel. Gödel's theorems forever prove the insufficiency of mere logic being able to furnish our rock. Any conceivable logical system involves statements that cannot be proved by the system, even though these statements may well be true. The bottom line is that truth exists, that it transcends logic, and that it can never be reduced to logic. Logic is ultimately and necessarily circular, so to the extent that you attempt to make it your rock, it will be as if you have encased your head in stone.