Still slogging my way through the archive. This is from an old post:

But with the gradually increasing materialization and quantification of our culture over the past several centuries, it is very much the case that our exterior maps are more detailed than ever, even while the interior ones have become sketchy and impoverished at best.

I say "at best" because when a map loses its features, it becomes a kind of canvas for the psyche to project upon. Prior to the development of systematic scientific discovery -- the discovery of discovery -- the situation was the reverse, in that our exterior maps were vehicles of psychic projection. People projected all sorts of mind parasites in the form of mythical beasts beyond the boundaries of the known world. It is similar to how liberals imagine that anyone outside their familiar territory is a greedy, racist, and homophobic monster, as seen below in the depiction of Trump supporters swimming beyond the shores of academia and the MSM: 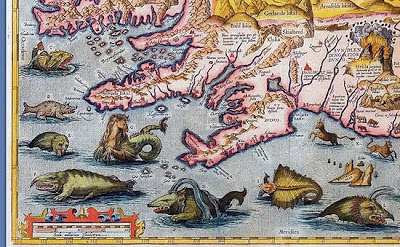 When the progressive condemns, every intelligent man must feel alluded to. --NGD

I was also thinking of how in a shame culture, you'll see a lot of fake honor; in a guilt culture, fake innocence; and in a victim culture, fake oppression and hate crime hoaxes. When victimhood is incentivized -- itself a crypto-religious secular perversion of "the meek shall inherit the earth" -- it results in a literal race to the bottom, such that the scum rises to the top.