Which is a good thing, in my opinion, for the most tedious books on theology are generally written by those who have the academic right to do so, but no divine obligation or mandate. I mean, no one asks Michael Jordan to show us his Ph.D. in basketballogy.

"There is an illiteracy of the soul that no diploma cures" (Dávila). Just so, there can be a hunger in the body that no amount of food can appease -- an insultaining formulation which explains the existence of both fatheads and fatasses.

Besides, in the words of Dávilagain, A dentistry degree is respectable, but a philosophy degree is grotesque. So a theology degree is just plain nauseating. For if you know what you're doing, you can't really be theologizing, because it's just coming from you, right? Thus, "the most lucid writer spends a lot of time doing what he does not know how he knows how to do" (ibid). I know I don't.

And what truly counts "is not what comes from the depths [↑] of the soul, but what invades [↓] it." (↑) can only take one so far. Even Aquinas -- one of the greatest thinkers who ever lived -- said that all his (↑) was "so much straw" in comparison to the overpowering infusion of (↓) he was vouchsafed toward the end of his life.

Not to mention the fact that "Prose is corrupted when it proposes to be convincing rather than simply intelligible" (ibid). In other words, I think the effective theologian must show, not argue, let alone "prove." It takes a lot of intelligence to not pretend to know what one is talking about, especially when one has a lot of education.

The first and last temptation of the tenured is the "solution." If this country fails, it will be due to the deadly solutions of the left, which mostly involve the manipulation language so as to try to alter reality.

Obama daftly illustrated this in his speech the other day at the National Defense University -- for example, "We must define the nature and scope of this struggle, or else it will define us."

This is a quintessentially postmodern sentiment, analogous to saying, "reality must comport with our truth, or else truth will be a reflection of reality." Can't have that!

As mentioned in the previous post, Caldecott's book is divided into three parts, the first one revolving around the "nature of nature."

Now, we all know that nature herself is supernatural, otherwise it would make no sense at all. I would say that, just as the intellect is "supernaturally natural," nature is "naturally supernatural." And to "know nature" is a form of mystical union -- to say nothing of loving nature, i.e., perceiving the beauty all around us.

So although the third section of the book is on "divine Wisdom," one is reminded of the fractal-trinitarian structure of the world, through which everything dynamically interpenetrates everything else. In order to depict this visually, one would need a trinitarian yin-yang symbol rendered fractally, only in a spherical form -- like the lower two combined into the shape of a ball: 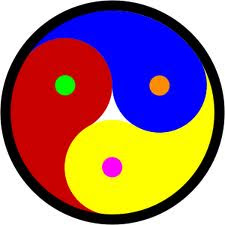 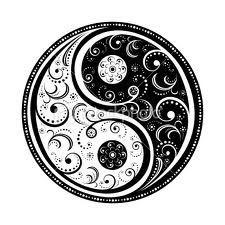 The first chapter is on the nature of light. As we know, in a properly oriented, bright-side up cosmos, the light we perceive with our eyes is an analogue of spiritual and intellectual light, not the converse. And here is something I did not know: Caldecott (quoting Thomas Torrance) notes that

"Clerk Maxwell's belief in the God who became incarnate in Jesus Christ made him question whether the universe created by the Wisdom of God did really behave in the way described by Newtonian mechanics.... It was through allowing Christian thought (such as the understanding of interpersonal relations derived from the doctrine of the Holy Trinity) to bear upon his scientific thinking that he came up with the conception of the continuous dynamic field, to which Einstein was to point as introducing the most far-reaching change in the rational structure of science and our understanding of nature."

So light comes from Light (just as life from Life, intelligence from Intelligence), for the converse could never be true -- nor could there even be truth in such a backassword cosmos, for that matter.

Later in the essay -- and I'm just flipping around -- Caldecott suggests that "the whole world" might be "a product of zero and infinity, in a sense poised between these two extremes."

I don't think there's any doubt about that, regardless of what the physics shows. Man is without question suspended between O and Ø -- we are spirit and dust, or matter that may transcend itself and touch truth, beauty, love, virtue, etc. The ambiguity of this in-between space is the source of all this tension and drama, because compared to God we are nothing.

And yet, compared to nothing, we are everything.

That's it for today. To be continued...

That's the subtitle of a new book by Stratford Caldecott, The Radiance of Being: Dimensions of Cosmic Christianity. No, I haven't overcome my recent word-weariness, but since I received a free copy from the publisher, I feel honorbound to write a review, even though there is no obligation to do so. I'm just not used to getting free stuff.

First of all, did he steal the book's title from me? Nah, we're just on the same page and in the same attractor. Just when no one I think is in my tree, here comes another sap in the same branch. I just now looked it up, and I see, for example, Christianity and the Cosmic Thing, Cosmic Christianity, or Adam & Evolution, and Incarnating the Cosmic Person, but I think the overall trend of the blog over the course of 2,181 posts has been toward the development of a "cosmic christianity."

Attractor? For Caldecott, the Holy Spirit is a "magnetic field" that "draws all men to Christ" and arouses "the love of man and [gives] it a direction." Man is always oriented to the Cosmic Center, if only he prays attention to the interior compass deivoice inside his head.

In truth -- and I've probably said this before -- Christianity has always been cosmic in its scope and its consequences. It's just that our understanding of the cosmos is very different today than it was one or two thousand years ago.

Rather, the Light that lights the world is always available to man as such, which is why, for example, Whitehead could make the remark that all philosophy is just a footnote on Plato, or why Aristotle and Aquinas will always be relevant, to put it mildly.

Not to go all Kant on you, but he did latch on to a partial truth in suggesting that, in some sense, the cosmos is a form of our sensibility. As Caldecott expresses it, "not only is the eye sun-related, the sun as well is eye-related."

In other words, we are both liberated and limited by our human station -- we don't perceive the world as does a bat, a cat, or an angel, let alone as does the Creator. Rather, we see the world as a human does, and any man, at any time, can circumnovelgaze the the limits of the soul, whether via philosophy, art, or virtue.

Man is in the image of the Absolute, which is why we may become "adequate" to it, even while not actually becoming it. Caldecott makes the same point: "Since there are orders of infinity, everything that exists can partake of infinity in a certain respect."

This is also why man may achieve terrestrial (i.e., relative) "perfection," but also why perfection cannot surpass itself and fully identify with the source of perfection. In the words of Schuon, "Man is made in such a way that he is never fully actualized within the limits of his possibilities except with the help of constraints, otherwise he would be perfect..."

Just as one perfect poem does not cancel out or negate another perfect poem -- or painting or musical composition -- we have to stop believing that one manmode belief system can cancel out all the others.

Rather, it's all true!, as it were. It's just a matter of properly situating everything in the cosmic hierarchy. Everything has its place, even materialism. Even leftism! Just not as a form of government. I run my family on thoroughly communist grounds, in that we all share everything, and everyone is equal, except some people are more equal than others, and if anything goes wrong, I investigate myself.

Hey, what about the book!

Right. It is actually a collection of essays -- what I call "blog posts" -- divided into three main sections, Nature, Divine Nature, and Sophia. It's all one, but one is three, as it were:

"In the Beautiful Logos all things cohere. In the Word of words all threads of meaning are drawn together, and the notes and noises of our lives add up to parts of a symphony or a song we could never have guessed" (Caldecott).

Where have we heard that tune before?

Right. Page 21: "The universe is like a holographic, multidimensional musical score that must be read, understood, and performed.... For at the end of the day, we are each a unique and unrepeatable melody that can, if we only pay close enough attention to the polyphonic score that surrounds and abides within us, harmonize existence in our own beautiful way, and thereby hear the vespered strains of the Song Supreme."

And on p. 248: "In the end, we are no longer a scattered, fragmented multiplicity in futile pursuit of an ever-receding unity, but a Unity that comprehends and transcends the multiplicity of the cosmos."

I would now put that differently, and say a Unity³, but this is nevertheless the dynamically "still point between the vertical and horizontal, where eternity pierces the present moment and we are unborn again."

Caldecott: "The ultimate resolution of the manifold tensions of existence is not the silence of the One, but the music of the Trinity," where "the unity is the distinction, and the distinction is the unity" (Eckhart, in Caldecott).

Well, I can't really compete with the pounding going on above my head. To be continued, maybe Friday.