We will soon if ever resume our discussion of the subject at hand -- whatever it was -- but at the moment I've got a conceptual earworm tunneling around in my head, and the only way to eliminate it is to write about it. For me, this process serves as a metaphysical exterminator. Or nonlocal ghostbuster.

It reminds me of a patient who was suffering from PTSD as a result of experiences in Iraq, including multiple roadside bombs. Especially when he was tired and laying in bed, he would see horrific and monstrous images emerging from the patterns in the ceiling. These weren't hallucinations per se, more dreamlike projections of unmetabolized experience. In any event, he was a skilled artist, and dealt with the flashbacks by drawing and thus externalizing them. So long as he could fleshout the flashbacks, they'd settle down and stop bothering him. At least for the night.

It started a couple of days ago, when a friend mentioned that a spiritual-but-not-religious atheist friend of his gives great credence to the Fermi Paradox, or the Where the hell is everybody? problem.

For me it's not a problem, because I don't expect human intelligence to exist elsewhere in creation, although I don't rule it out. But if it does exist it can only have a transphysical source, and would not in any way prove that the existence of human beings is a random occurrence explicable by chance. Metaphysically this is a total nonstarter, so long as one understands what human intelligence is.

At bottom, the Fermi Paradox is just another iteration of the 100 Monkey business, i.e., that with enough random typing on an infinite number of typewriters, everything will occur, including us. Any plausibility in this idea was given the kibosh with the discovery of the Big Bang, which limited our monkeys to 13.7 billion years of typing. That's a lot of years, but not enough for randomness to produce an amoeba, much less a me Bob (and this is leaving aside the ontological leap from animal to human intelligence, unbridgeable by any material explanation).

I used to accept the Fermi Paradox, although I wasn't familiar with the name. To the metaphysically untutored, it has a kind of prima facie plausibility. You know what they say: a little philosophy inclines one to atheism, while a lot of it lands one in the lap of God. That's not an insult. It just means that you need to be intellectually consistent and rigorously follow your metaphysic all the way to its principal source and its logical entailments.

But let's just focus on our earth. First, it hasn't been here for 13.7 billion years, only 4.5. Moreover, life appears around 3.7 billion years ago, leaving a window of only 800 million years for our primate typing pool to get the job done (exact numbers subject to change without gnosis).

Others have done the math, so I won't bother you with the details, but it is mathematically impossible. Add to this the fact that for most of those 800 million years the planet was too hot to host life. If I recall correctly, life appeared within a window of something like 130 million years, and there just aren't enough monkeys or typewriters.

Ah, but that's the point! Yes, it is impossible for life to have occurred by chance in such a short time. But the problem disappears if we posit enough galaxies and planets. Perhaps life appeared on another planet, but their sun went supernova on them (d'oh!) propagating its elements hither and yon. Some of this fairy dust landed on earth, and here we are.

Of course, this just pushes the essential problem further back without addressing the real question, which is the generation of extraordinarily complex information content in lifeless matter. If this is even possible, then it is necessarily possible in principle. So, by virtue of what principle is it possible for matter to leap across the exterior horizon and organize itself around a subjective center? I know how it's possible. But I would like to hear how the materialist explains it without negating the explainer -- you know, climbing into a metaphysical hole and pulling the hole in after him.

Is there extraterrestrial life? Yes, of course. For life itself -- and in principle -- is extraterrestrial, i.e., transphysical. If it is wholly terrestrial then it reduces to matter, but in so doing eliminates everything that is distinctive about life. It reminds me of the free will problem: if one believes in predetermination, then our individual existence is illusory, and we are but mere extensions of God (or of matter, depending on your god).

What about planets other than earth? What is the earliest conceivable time that planets could have formed and cooled sufficiently for life to magically appear? I don't have time to look it up, but there's much more to the problem than mere statistical likelihood. For example, given the fact that the NBA has existed for some 70 years, the Clippers should have won several titles by now. And yet they've won none. Paradox! The Boston Celtics must have drafted players from other galaxies!

Obviously there are other factors than pure probability. In the case of life, the number of factors necessary for life to exist are too numerous to catalogue here. So long as you set no conditions on planets, and assume that every planet is habitable, then the emergence of life seems superficially plausible.

Here again, I won't bore you with all the necessary conditions, but these include size (too much or too little gravity causes the wrong molecules -- e.g., methane and ammonia -- to remain at the surface or the right ones -- e.g., water and oxygen -- to dissipate), distance from the sun, axis of rotation, a perfectly situated moon, the existence of a planetary wingman like Jupiter, whose much stronger gravitational field pulls in all the meteors that would otherwise strike the earth, etc.). Last time I checked, the number of such necessary conditions surpassed 150, which works out to something like one chance in 10 the 73rd power.

Yeah, I know what you're thinking: 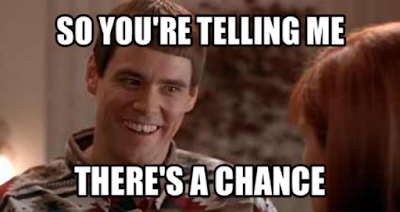 I see your scientistic faith is strong, but no, there is no chance. We haven't even addressed the sufficient condition for human intelligence, and as we've pointed out so many times, no amount of animal intelligence adds up to human intelligence or even human stupidity (for example, there are no Marxist or deconstructionist animals).

The gap between animal and human intelligence is literally infinite, even though, from our perspective, we can see numerous analogues between our intelligence and animal or tenured intelligence. But the most intelligent animal lacks the transphysical soul whereby we effortlessly navigate an immaterial world of abstract concepts, essences, logic, truth, beauty, compassion, humor, inexhaustible creativity, and so much more. No animal can conceive oneness, let alone conceptualize the One.

One question addressed in the bOOk is how prehuman primates came to inhabit this mysterious intersubjective world in which we have our being. Here again, no amount of intelligence can result in this leap into the transitional space of intersubjectivity.

Nor is it likely to occur, even on earth. Last time I checked, some 50 billion species had arisen on earth. And yet, we are alone. Then again, being human means we are never actually alone, or we couldn't be human. But that's the subject for a different day and a different earworm. I think I killed this one. 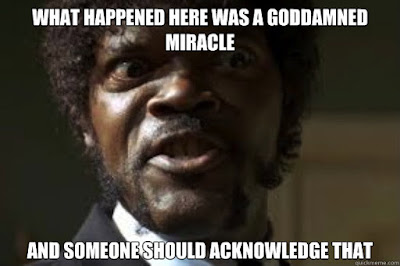