For the last several weeks we've been stalking several subjects that appear to be implicitly related, otherwise we wouldn't be circling them. In other words, it isn't so much that we are circling them as they are drawing us toward them, and that they in turn cohere around their own center.

Think of stumbling upon a series of seemingly independent planets that are actually in the orbit of one central star. Is there a star witness somewhere who can tie up our loose ends?

The fact that we keep flitting from topic to topic -- along with the discontinuous nature of the flight (which is a little like trying to resume a dream the following night) -- may obscure the fact that we have indeed been orbiting around a center and trying to zero in on it. It's just that this center is what is called a strange attractor, in fact, the strangest of all attractors, specifically, O.

In other words, I'm sure I have a point, or rather, that the point has me (in its orbit). The wiki article includes a helpful image of a strange attractor, which looks something like this (although each one is necessarily unique, which suggests to me that each individual human person is none other than a strange attractor): 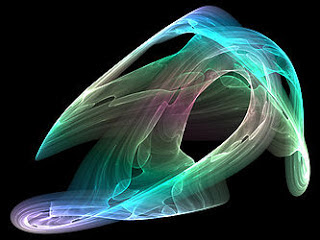 As you can see, it's a little like a roller coaster in hyperspace. Which is a good metaphor for life.

You may recall that this strange and complex thread began with Brendan Purcell's From Big Bang to Big Mystery: Human Origins in the Light of Creation and Evolution, but eventually homed in on Eric Voegelin, beginning with his Hitler and the Germans. After that I leapt with both feet into Voegelin's oceanic corpus, where many men have drowned. It seems that all he ever did was think and write, and no thought was left unwritten.

He also changed his mind in fundamental ways that affect all his previous work, so it's not as if you can just grab one piece out of context and run with it. Rather, it's more like the Bible, in which one must have a view of the whole in order to comprehend the particulars. Just last week I heard someone mention that the Bible is "hermeneutically asymmetrical," meaning that the relation of the NT to the OT is not reversible, in that the former fully illuminates the latter, whereas the OT can only imperfectly hint at and grope toward its fulfillment in the NT (for Christians, of course; no offense to our Jewish friends).

And the Whole is precisely what we are dealing with in this thread (indeed, this blog), which is to say Cosmos and Man, or Macrocosm and Microcosm, or Time and Eternity, or ultimately -- to express it in a completely unsaturated manner -- O and ʘ. This latter equation is irreducible to anything less, because there is always man and ground, however one formulates it.

As mentioned in the book, the cosmos is either absurd or it is not absurd. Indeed, we can begin with a kind of flow chart, with that question at the top.

But if you deicide at the outset that the cosmos is absurd, then you may stop. Game over. Philosophy is not possible. Thinking is a waste of time because reality is unknowable. The cosmos -- and Darwin -- is finished with you, assuming you have passed your genes on to the next absurd generation. Or not, depending upon your fitness for genetic duty.

However, if the cosmos is not absurd, then this is where things get interesting, for we are thrust into the strange attractor referenced above. If I grasp Voegelin rightly, it was his purpose to actually describe this attractor in as much detail as humanly possible. He called the attractor order, hence the title of what many people feel to be his magnum opus, the five volume Order and History.

Now, bear in mind that exhaustively describing this order -- i.e., containing it -- is precisely what man may never do, since this transcendent order contains us.

But man doesn't like this idea, and has had difficulty swallowing it ever since Genesis. There we learn that this transcendent order is All Good, so long as man subordinates himself to it and doesn't try to concrockt his own.

Thus the birth of ideology, which is always wrong, only more or less demonically so. An ideology is any system of thought that superimposes a second reality on the first, which has the practical effect of severing man from the ground in more or less coercive or violent ways. Ideology ends in the murder of man -- man as such -- either physically or spiritually (and usually both).

One important point of, er, order. It is quite clear that man's lust for ideology is, or might as well be, intrinsic -- as if we are all infected with Adam's primordial mind parasite. Thus, there is nothing that cannot be "ideologized," including the very cures for ideology, e.g., Christianity or American (not European) style conservatism.

A useful point of entry into Voegelin is his Science, Politics, and Gnosticism. One reason it is so helpful is that in it he recovers a certain transtemporal unity of man, in tracing the modern ideologies -- e.g., scientism, positivism, Marxism, fascism, socialism (but I threepeat myself), etc. -- all the way back to antiquity.

And "prior" (ontologically or vertically) to antiquity is mythology. Myth occurs at the horizon of history, and tells us vital things about our deep structure that cannot be recovered through the historical method. Again, Genesis would be a prime example.

If we are aware and respectful of the cosmic order, then it is a kind of unknowculation against ideology. Properly speaking, Christianity, for example, should not be an ideology, but rather, a ground-level encounter between persons. "Dogmatic order" is obviously important, but is posterior to the Person (or Relation of Persons) and all it implies.

Nor should conservatism ever be reduced to an ideology; rather, it should simply be a healthy respect for the Nature of Things, whether human, societal, economic, political, spiritual, or any other mode. The point is, reality always comes first, not the ideology. Which is why Voegelin concluded that the "essence of modernity is gnosticism."

We'll leave off with some aphorisms that circle the same Attractor, i.e., Person-Ground-Center:

Conservatism should not be a political party but the normal attitude of every decent man.

Loyalty to a doctrine ends up in adherence to the interpretation we give it. Only loyalty to a person frees us from all the indulgence we grant ourselves.

For the Christian, history does not have a direction, but rather a center.

For God there are only individuals (NGD).