I think it's appropriate to pause a moment and reflect on ten nine years of the One Cosmos blog, what with a seemingly endless trail -- or blockade, depending on your point of view -- of posts extending back to October 2005: 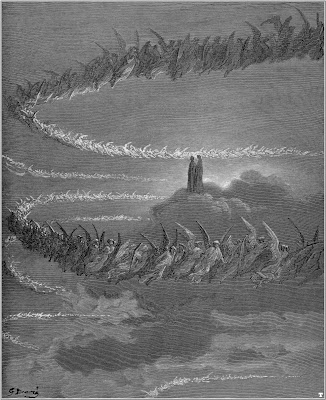 Okay, that's enough. No need to get maudlin. Back on your heads! 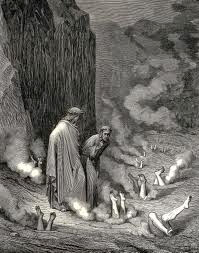 Hey, that image looks familiar! Must be from that series of posts we did on the Divine Comedy a few years back. Being that the goal of this blog has always been to write things with no expiration date -- or no possible relevance, depending on your point of view -- might as well repost it today, because I'm short on time:

We're finally up to the canto we've all been waiting for, in which Deepak Chopra gets his just desserts. For this is the valley of rapacious brutes who debauch themselves for gold -- who distort spiritual reality by treating it as a profane thing to be bought and sold.

Folks here are buried head first up to the knee with their feet exposed, the soles of which are on fire. Strange image. I wonder what Dante had in mind?

Upton writes that the souls here "are buried in an inverted position because they have inverted the spiritual hierarchy."

As we know, the principial world (the world of metacosmic principles) is like an inverted tree, with its nonlocal roots above and its convenient local branches down here below.

Therefore, the inverted position of these vulgar simoniacs (one who practices simony) is simply an image of what they inverted -- and perverted -- in life. Thus, their feet, which symbolize the terrestrial world, are at the top, while their heads, which symbolize the celestial, are at the bottom. This reveals their true values and motives, which cannot be hidden from God.

This brings to mind what may be my favorite letter of Meditations on the Tarot, The Hermit. The hermit is a properly right side-up man, and for this reason will appear upside-down to the worldly. This blog is proudly upside-down, and always will be. We're here, we're queer, and we're not going away.

Such a man does not deny the world but sees it -- and its contents -- in its proper perspective and order. He does not place what is both priceless and of urgent importance above what is ephemeral and insignificant. Which is why The common man lives among phantasms; only the recluse [i.e., hermit] moves among realities (Aphorisms of Don Colacho). Now, there was an invert!

Furthermore, the hermit is the cosmic locus of the synthesis of heaven and earth, i.e., their union, not polarization. He represents the harmony of intellect, emotion, and will; or mind, heart, and strength.

But again, such a man will appear upside-down to the hypnotized mob and tenured rabble, for Modern society works feverishly to put vulgarity within everyone’s reach (DC), and largely succeeds now that so many of us attend college, those somnambulant secular seminaries of factsimian sophistry.

For the properly spiritually oriented man, his soul is on fire and God is the water. But in this vale of hell, the soles are on fire and there's no water to be found. Dante also notices that the fire flickers back and forth between the heel and toes. Upton suggests that this is another inverted image, this one of the purifying spiritual fire, since in Hell it moves horizontally rather than vertically.

In a foot note, Upton reminds us of the spiritual hucksters who charge good money to teach idiots how to walk barefoot on hot coals. I always suspected that Tony Robbins was a preview of hell.

The valley of the hotfoot is also a parody "of the baptismal font," in that these sinners "are horribly baptized by the fire of the Holy Spirit they sought to buy and sell" (Upton).

But the Divine Fire is not a plaything. To imagine that one can control it sufficiently to truck and barter in its activation is about as wise as selling nuclear secrets to Islamists. In the long run you end up with the Agni but no ecstasy.

In the next valley it gets even hotter, for it is the vale of the spiritual pundits, the magicians and diviners who "impiously sought to pierce the veil of the future" (Upton). These people cause much more mischief than you might imagine, for they are spiritual prometheans whose reach exceeds their grasp -- or whose mental being surpasses what they have properly assimilated and actualized spiritually. They are engaged in the dangerous practice of driving in front of their headlights; in other words, they are operating in the dark, with mere knowledge (k) in front of being (n).

Therefore, in this valley of hell they are perpetually facing backward. Once again it is an inverted image of how they functioned in life; in being turned backward, they remind us "of a 'vanguard' cadre in politics or an 'avant-garde' movement in the arts, which, after a few years, turns out to be totally reactionary; their attempt to conquer the future binds them to the past" (Upton).

Is there anyone more nauseatingly predictable and reactionary than the political "progressive" or artistic "transgressive"? Even the word "progressive" implies an ability to see into the future. But when their future arrives, it is always an atavistic hell. Obama does not look forward but backward, to Jimmy Carter, LBJ, FDR, and the whole failed history of illiberal collectivism and statist coercion. Likewise the public employee unions for whom it is always 1900, or liberal blacks for whom it is always 18th century South Carolina, or feminists for whom all reality is one big Daddy Issue.

And of course, such people are not only looking backward but down, toward the lowest rung of the cosmos. No one pretends that the unions are fighting for any ideal except for their own material gain. But in the words of Don Colacho, there is no faster way to corrupt an individual than to teach him to call his personal desires rights and the rights of others abuses. Such an assoul is upside-down, inside-out, and assbackward.

Hey, it's a Tony Robbins seminar, and it will only cost your soles! 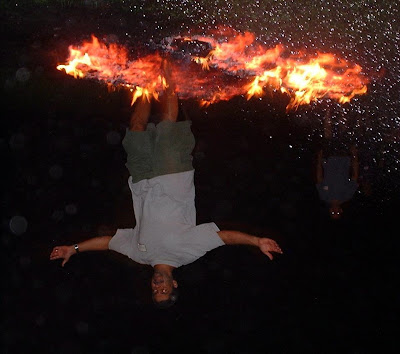 The valley of the hotfoot is also a parody "of the baptismal font," in that these sinners "are horribly baptized by the fire of the Holy Spirit they sought to buy and sell" (Upton).

It also mirrors the moment when Christ washed the feet of his disciples. Instead of water, fire; instead of otherwise clean disciples who just needed their feet cleansed, the false are buried in filth.

Funny, I'm seeing a lot of Dante references lately. Plus our Rick was just there in the man's hometown this past week.

their attempt to conquer the future binds them to the past" (Upton).

Doesn't this apply to any of us at any moment when we fret about our present circumstances and seek our own way out of them? It's so really and truly hard to wait, and not to light one's own fire. (h/t Daniel Amos) All of our personal efforts to conquer our future are just so much strange fire until we learn to dwell in the Slack.

In fairness, it's still 18th century in South Carolina. And not just for Blacks. It's a prevailing social paradigm still lingering in the mud of Charleston. It's ugly when you experience it.

Bob, I hate to be a moon calf or a party pooper, but I think Oct/05 through Oct/14 would be 9 years, not 10 years. You are starting your 10th year. Having said that (and possibly misunderstood or miscalculated), nine years of producing a content rich, thought provoking and spiritually enriching blog the way you have is worthy of praise and celebration - so don't stop the celebration based on a little moon calf math.

But you forget that there was a year's worth of gestation. Like the Chinese, Bob counts his birthday as Year One.

I was told there would be no math.

But in any event, the occasion still calls for a second or two of reflection.

Fire-walking always reminds me of Pearce. Apparently he's still alive and not yet fallen through the crack.

Nonary is a real thing.

I learned all the different numeral bases in grade school. 2nd Grade. The nuns were serious math geeks.

Hey guys? The Jolly Roger has started a blog, after all these years. Go by and toughen him up... er I mean... give him a warm Raccoon welcome.

He does not place what is both priceless and of urgent importance above what is ephemeral and insignificant. Which is why The common man lives among phantasms; only the recluse [i.e., hermit] moves among realities (Aphorisms of Don Colacho). Now, there was an invert!

Anyhow, that aphorism hit home as I have been thinking along those lines these last few weeks as I work this homestead with my hermit wife.

(Can you co-hermitate and still be hermits?)

The J.R. and I co-hermitate on a boat.