Ontological Necrophilia and the Total Eclipse of the Cosmos

We left off pondering the sort of creature capable of making a roundtrip tour of the cosmos and rejoining the source of being. Ironically, chances are, the same people who ridicule “flat earthers” are likely to be flat universers.

But last I heard, any straight line in our universe ends up where it originated. Does this mean that if we could only see far enough, we’d see our own aseity? Let’s check. But be quick about it! We’ve got a lot of goround to cover this morning.

Could the Universe actually loop back on itself? And if you traveled far enough in a straight line, would you eventually return to your starting point, just as if you traveled in any one direction for long enough on the surface of the Earth?

While it’s easy to see how a positively-curved space can be finite and closed, it’s a little less intuitive to realize that a flat space could be finite and closed as well, but that’s also the case. To understand, simply imagine a long, straight cylinder, and then bending that cylinder into a donut-like shape until the two ends connect. This shape -- known as a torus -- is both spatially flat and also finite and closed. 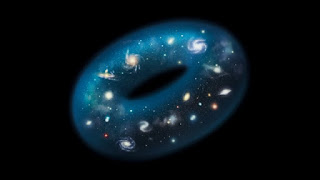 Well, that's a relief. I always suspected the cosmos looked like a donut, hence the  ʘ in  ONE CʘSMOS.

Let’s jump to the bottom line: in an abstract sense a straight line would return to itself, but there hasn’t been enough time for it to do so:

The Universe may, on some very grand cosmic scale, truly be finite in nature. But even if it is, we’ll never be able to know. While we can travel through space as far as we like, as fast as we can, for as long as we can imagine without end..., there is a cosmic horizon that limits how far we can travel through the expanding Universe, and for objects more than ~18 billion light-years away at present, they’re already effectively gone (https://bigthink.com/starts-with-a-bang/travel-straight-line/ ).

Let's just say that if the universe were finite, it couldn’t be. Besides, Gödel.

Come to think of it, as we all know by now, there is the real, cage-free world, and the infertile world described by physics, and the latter is -- duh -- only an abstraction from the former. This is what De Koninck refers to as "the hollow universe." And even though it is hollow, no one could actually live, let alone breed, inside it:

The objects available to us in experience are much richer than those described in modern mathematical physics…. Mathematical physics deals, literally, with abstractions and there is a tendency to take these abstractions for the whole of reality. The result is what De Koninck meant by the expression “hollow universe” (Armour).

Besides, Gödel.
Remember: it is always we who understand the cosmos, not the cosmos that comprehends us. It reminds me of a somewhat cryptic utterance by the Aphorist, that

Don’t take this the wrong way, like some solipsistic newage sewage, or as if reality were a ghostly form of Kantian rationalism.
The point is, we begin with the concrete reality of our own existence, which includes an intellect capable of unpacking the intelligibility of the world via abstract concepts. This doesn’t mean we can begin at the other end, as if we could somehow deduce our existence from our own abstractions! For

Of all the vicious circles one could imagine, that in which the materialist encloses himself is the most primitive, restrictive, and binding (De Koninck).

I’ve said this before, but consider the fact that if we are able to explain natural selection, then natural selection is unable to explain us. This is self-evident, and therefore beyond the reach of tenure. More generally, any theory is an abstraction from the concrete totality of Being.
Which is a convenient place to insert De Koninck’s bottom line:

Every natural form tends toward man…. in this perspective, subhuman forms are much less states than tendencies.

This is at once obvious and (apparently) difficult for people to wrap their minds around. But even the most trivial thing we can know about the most inconsequential thing, means that the intelligibility of that thing speaks in and through us.
Things are not opaque, but rather, transparent to our intelligence; which again, as Einstein said, is just about the most freaky thing about our universe. Everything “speaks,” but only with the arrival of man is it “heard.”
For example, the universe was shouting about how E = mc2!!! for billions of years before Einstein came along and heard it. For that matter, it was raving about Gödel’s theorems before Gödel took the time to listen.
So, the universe literally tends toward man, i.e., has the homosapiential tendencies mentioned in yesterday’s post. We literally complete a circle that otherwise makes no sense without us, for the message presupposes a recipient.
This is the concrete (not abstract) and dynamic (never static) circle in which we always find ourselves -- and I want to say, in which God finds us, and no, I’m not trying to be cute:

the cosmos is open to another world which acts on it. And this cause can only be a living being; it is necessarily a pure spirit, a transcosmic being.

Come to think of it, as we all know by now, there is the real, cage-free world, and the infertile world described by physics, and the latter is -- duh -- only an abstraction from the former.

In a sense, much of the time we spend in education is the same. The abstractions are important in aiding our understanding, but if/ when we confuse the abstractions for the reality we are in for a world of pain.

I had a record, but I think it was a good album when I listen to the CD again and the impact at that time was not good. Elvin's guitar tastes really good!

Daylight saving time, which is included in this album, brings a special impression. Tense deployment of each part holding sweat in hand can be enjoyed intense.

In a nutshell, it's too amazing and pervert. Doing that drumming with a big smile is just insatiable.

That is too funny. The last paragraph definitely doesn't mean whatever the author thought it would mean...

Maybe it's the Japanese equivalent of being hailed as "sick."