Space is to Spacious as Time is to (x)

Yesterday we were thinking to ourselves that space is to spacious as time is to (x). After pondering it for a good ten or twenty seconds, we concluded that there is no word for (x).

Timaeus? Plato already yoinked that one for unrelated purposes, although the dialogue does indeed touch on our theme. According to Prof. Wiki,

The two worlds are conditioned by the different nature of their objects. Indeed, "a description of what is changeless, fixed and clearly intelligible will be changeless and fixed," while a description of what changes and is likely, will also change and be just likely. "As being is to becoming, so is truth to belief." Therefore, in a description of the physical world, one "should not look for anything more than a likely story."

Platonism is one of the permanent possibilities of philosophy (or philosophizing). It is a respectable approach, but like most philosophies, it gets some things right and many things wrong.

Bob knows it's difficult to arrive at an explanation that doesn’t unexplain even more. This is because -- come to find out -- “complementarity” (so to speak) is built into the Substance. With this one weird trick, it is possible to explain it all without leaving anything out, at least insofar as self-conscious finitude — AKA the human station — allows.
I am aware of no other metaphysic short of a triune ontology that places complementarity at the foundation of things without devolving to a vicious dualism.
But that’s not the subject of this post. Then again, since I’m the one who brought it up, perhaps it will help us understand what (x) can possibly be.
Could it be that I’ve discovered an obvious and experience-near reality for which there is no word? Well, let’s begin with the reality, which is something like “spacious time.”
Note that it’s difficult to even talk about time without bringing in spatial metaphors. For example, Time is Tight by Booker T & the MGs, or Tomorrow is a Long Time by Dylan, or As Time Goes By from Casablanca.
There’s also Summertime, when the livin' is easy, and now maybe we’re on to something, because ease is a noun and not just an adjective: the state of being comfortable, as freedom from pain or discomfort; freedom from care or worries, tranquility of mind; freedom from labor, effort, inconvenience, or burden: RELAXATION.
By Jove, I think we've got it: space is to spacious as time is to... SLACK. I can’t assume everyone knows the religious origins of the term, which can be found here: (https://www.amazon.com/Book-SubGenius-Sacred-Teachings-Dobbs/dp/0671638106/ref=sr_1_1?crid=33YM2QB2W2XDL&keywords=subgenius&qid=1669058008&s=books&sprefix=subgenius%2Cstripbooks%2C145&sr=1-1)
Of course, slack is a joke, and of course Bob an even bigger one. For the secret protects itself, sometimes behind gales of laughter. But now that we have something to grab hold of -- a word -- I think we’re in a better position to investigate its relevance to the human journey "through time." Whatever the case may be, I think you'll agree that 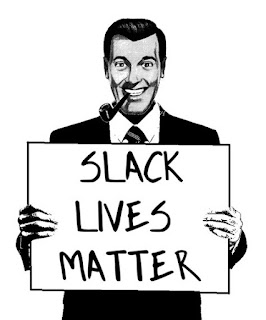 Now if only we could convince the rest of the world to respect our slack, we'd have paradise on earth.

Being strictly impossible, I guess we have to appreciate our slack when and where we can get it.

My best friend in grade school was the official “smartest kid in the class”. He was also always sick on the first day of school.

There’s something to be said for slack parents methinks.

Today he manages a homeless shelter for his church. Yet strangely, he's moved back into his parents’ house so he can take care of them. I sure hope he isn’t domineering them into being the very best aging parents in the neighborhood.

We have a natural right to be left alone, since it implies a reciprocal leaving others alone. But the left's inability to leave us alone cannot be answered by leaving them alone, so the struggle is asymmetrical. In short, all we want is slack, and all they want to do is diminish it.

And then there are those who are always busy but rarely get anything done, who get angry if someone else gets things done, especially if they don't look busy while doing it.

Some days I understand people a little; others, not at all...

We have a natural right to be left alone, since it implies a reciprocal leaving others alone. But the left's inability to leave us alone cannot be answered by leaving them alone, so the struggle is asymmetrical. In short, all we want is slack, and all they want to do is diminish it.

Is there another place where the demise of my beloved Christianity can be honestly discussed?

I'm slacking diligently today, since there is no snow to shovel, the sun is even shining, but even when shoveling snow, I often wander into a state of slack. In regards to being left alone, so I am able to fully realize my slack, I give to the Left, and even the Right, only that which is embellished with their image, like a denarius. I absolutely do not care what those in thrall to the state, or an institution, let alone another individual, thinks about my slack. It's mine, and it was given to me, by Him. I'm prepared to be hated, because I have it on Final Authority that it will be so because I'm slack.

In a variation of Brandolini's law, I would say that the amount of energy needed for us to protect our slack is an order of magnitude bigger than that needed to for the left to diminish it.

We're always one generation away from the extinction of our slack.

I don't pretend to know anything about Trump's motivations, all I know is that he gave up a very enslackened life to fight against those who wish to diminish ours. Unlike the Republican party.

I'm just thankful Trump is not a politician. If Trump ascends to POTUS, once again, he better more wisely choose the men who surround and counsel him. The previous men around him as POTUS, each and every one, was a Brutus.

Wow, this is a long post this morning, too long for me to even try to edit. Not only is it about eternity, it's taking almost that long to write it.

I found a meme for that

The trick is to wait until low tide.

Why the Left Relies on Statistical Illiteracy. I know: because they rely on every other kind, so it would be unfair to exclude statistics.

"Conservatives are keenly aware of this problem, because the mass of researchers have tilted to the left for a generation and more. Shoddy research dovetails astonishingly well with radical polemic.... Every public policy arena amenable to professional expertise attracts a pile of half-baked research, eagerly cited and repeated until much of public opinion takes it as some sort of proven truth....

"The monolithic politicization of science and social-science professionals, alas, is likely to become worse. "

There's a reason why government schools don't mandate logic, economics, and statistics: it would spell the end of the left.