Really, Bob, Must You?

Before moving on to Lecture 2, a couple more points from Lecture 1 (of Understanding and Being, which consists of a series of recorded lectures on Lonergan’s magnum opus, Insight).

Toward the end, he makes a somewhat passing comment about how no one has ever seen a “must.” Rather, it is something that can only be understood. Once you think about it it’s obvious, and yet, full of implications.
For example (these are my thoughtlets, not Lonergan’s), we all must die, but my dog is right now sunning herself in the backyard, happily oblivious to any existential or ontological musticism.
More generally, her life is entirely free of any musts, even conditional musts, for example, I must feed her, she mustn’t bark at the new neighbors, and the poop isn’t going to pick up itself.
Mathematics is really a binary language of must be or can’t be -- or at least it was back in my day, before progressive educators got hold of it. Must be nice!
Nowadays, the mathematical must is transcended by a higher must. In this case, if Children of Color do poorly at math, then it must be due to racism. There is no other possible explanation. And if you don’t accept it, then you too must be racist.
This turns out to be a convenient explanation, because like the must itself, no one has ever seen this racism. Rather, it can only be “understood.”
Then again, note how progressives do indeed employ the mathematical must in order to prove the existence of racism. For example, that’s a nice corporation you have there, and if there’s a statistical disparity between how many black employees you have and how many we think there should be, then you will be fined. And the fine will be expressed in an exact number. Unless, like google, you transfer an exact amount of cash to the Democrat party, then you get a pass.
I don’t want to get bogged down in the insultainment. Let’s just say that human beings have unique access to this world of must be, could be, and can’t be. But it’s more complicated than that, because most of what the left believes can’t be, and yet, there it is. What’s going on here? They must be mad!
Or is there a method to their madness? Must be both.
One of the frustrating things about this day and age is that we have insight into them, but they have no insight into us. They never stop with their usual accusations, but these aren’t insights, rather, just libel.
Now, what is indoctrination but the assimilation of a whole range of false insights about the world? Having once been a manchild of the left, I know this is true. None of those neo-Marixst insights actually saw into reality, so what was the appeal? Why did I believe it?
Let us count the whys! Social status, unearned virtue, intellectual superiority, cheap omniscience, cultural pressure, fitting in, cash and other valuable prizes….
But in the end, a hollow universe.
Enough! Lecture 2, entitled Elements of Understanding. By the way, the first was called Self-Appropriation and Insight, and thank God I appropriated myself from the left without even having to pay a cult deprogrammer. Which reminds me. There is only one amazon review for the book we’re discussing:

[Lonergan’s] writing is esoteric, erudite and the stream of consciousness inundating. One has to read ever so slowly so that the text registers. Wonderful exercise in self-exorcism!!!

Ho! Turns out I didn’t have to employ that cult deprogrammer because I exorcised myself. Not without nonlocal assistance, of course, but that’s another Subject. At any rate, turns out the universe isn’t so hollow after all. It's just that inverse insight makes it appear that way.
Speaking of which, I see a note to myself in the margin: your cosmos is as large as that which interests you. This is a lesson I try to impart to lil’ Gagdad, being that I am interested in everything. Therefore, my cosmos literally can’t get any larger, and yet, it is always expanding. In other words, it cannot be contained, but the ceaseless attempt to do so is just about the last word in adult innerattainment. Must be fun!
It is. But why? It reminds me of that old joke by Steven Wright: 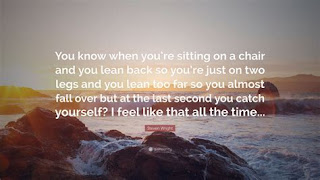 You know that state of being totally puzzled, only relieved by a sudden insight? I feel that way all the time.
Only man can render himself puzzled, confused, open to surprise. Seems like most people put a premature end to this bewilderness adventure, when I don’t see any way out short of death. We all must die. But no one needs to stop wondering in the bewilderness and being fed from above with daily insights. But perhaps I’ve said too much. You must think I’m mad!
Posted by Gagdad Bob at 11/29/2022 11:24:00 AM

You must think I'm mad!

Nope. I think you're always leaning just about too far back on the two legs of that chair, which leads to you wordsmithing the insights you've almost fallen over on, and then sending them spiraling out into the cosmos for others to ponder. Nothing wrong with that.

I appropriated myself from the left without even having to pay a cult deprogrammer.

It just dawned on me how fortunate I was in college. Most teachers outside of English departments stuck to their subjects without straying too far into leftist nonsense, but one in particular was openly hostile to it, and would regularly slap down our class socialist troll in highly entertaining ways. The troll never learned, but for the other 20 or so students it was a highly effective method of deprogramming. I doubt he could ever be hired today.

You must think I’m mad!

Well yes, but only in the best way.

What could they possibly think of Captain Beefheart in Japan? Alot!:

I'm not very familiar with rock, but for example, Kinks's “You Leary Gut Me” or “My Generation” of Fu has not lost the goodness of the coolness and nori goodness, or rather, I felt as much as winning. Even if you don't bother, people who know already know enough to die for decades ago and are reading this right now.

It is easy to listen to as well as the features of the cow heart captain are out enough, so Shiny Beast even for beginners, beauty is turbulent and recommended.

“Frownland” is literally translated “country of grimace”. In “Ant Man Bee”, “White ants are running. The black ant is going on in the belly. Yellow ants are dreaming.”

It's not the music you can listen to when you're down and your temon is low. I'll listen too much to say! I feel that I can't ride and empty when I think. While taking a walk, while relaxing in the sake light, listening to bokeh, suddenly I feel that I can understand suddenly.

What I think is as esoteric and formidable as I thought, in recent years I listened to the storm of the bithetique first, and this work is much easier to hear. And I have a liking feeling that the ideda should be ahead and not a ban with a tectake.

I like music but I don't have any logic or bumpy, no rationality, not an out-of-the-box music theory I believe the theory I thought of myself without knowing it, and feeling that it is a product of passion that embodies it.

It's certainly a blush thing, but I really liked music and I didn't like it, what I want to do is rationally and I feel that I will do without a sudden crush. Yeah, it's a good place to influence the coolness of the music that is useless, but it's a good sense of the sense that you listen to cool whatever you do. There is no doubt that it will be a lifetime of relationship.

You may be puzzled by the thick voice of the beef heart and the backing of the buck, but please listen to it for now. Every time the truck is swapped, there is no other feeling that the impression is updated than the previous one, because it is a distraction, I feel a rather unitary degree of unity. 28 tracks continuously the free sound of music and the rhythm of response as if thunder fell in the jubbing place.

Reading that Japanese review of Captain Beefheart is like trying to understand what my two year old grandson is babbling about. You can catch about every third or fourth word, but the rest is gobbledygook. In the writer's favor, though, is that he's listening to American music. If you have time to take in a documentary about Japanese appreciation for bluegrass, I recommend watching "Far Western." I think you can still get it on Amazon Prime. Here's a link to IMDB on the film.