The Cheap and Primitive Edge of Experience

This post may be more rambly than usual, because we are attempting to explore the far edge of the psyche in real timelessness, where things aren't so neatly ordered in a linear way...

The question is, is the primitive edge of experience the edge of primitive experience? It really comes down to whether there is anything about the psyche today that can help us get into the mind of archaic humans.

It seems to me that you can't start with an adult. Compared to a first-world adult human, a primitive man would likely look more like an animal. However, we all start off as infants. And apparently, an infant of 50,000 years ago is essentially no different than an infant born today.

Let's enter the all-the-wayback machine and try to imagine what it was like. If you consult p. 150 of the book, there is a stab at it by another author. First of all, there is no writing and probably not much of a vocabulary:

"Learn to use facial expressions and bodily gestures to convey much of your meaning." Also, there can't have been much in the way of insight, or critical distance from oneself: "You have not yet developed the ability to analyze and plan beyond the most rudimentary level." The space we call the transcendent Third -- for it is between neurology and world -- has yet to be fully pried open, but we have a foot in the door.

Time too must have been closely bound to the rhythms of nature and to biological need. The latter couldn't have been far from awareness at every moment of the day, i.e., the next meal. It's not as if you could walk over to the fridge and grab a snack.

Danger was everywhere. One wonders to what extent fear was the dominant emotion. In any event, "Put aside any sophisticated emotions, such as romantic love. You do not have a a sufficiently distinct sense of yourself or others to support such feelings."

Back to temporality, "Exclude an extended past or future from your awareness. All that is significant is happening now." Moreover, there is no rational explanation for anything. This can't be stressed enough: "Everything that happens is the result of invisible and unknown forces."

Consciousness must at first have been very "diffuse" and extended, not localized and contained in the head. Hans Jonas describes this in The Phenomenon of Life:

"When man first began to interpret the things of nature -- and this he did when he began to be man -- life was to him everywhere, and being the same as being alive.... Soul flooded the whole of existence and encountered itself in all things. Bare matter, that is, truly inanimate, 'dead' matter, was yet to be discovered -- as indeed its concept, so familiar to us, is anything but obvious."

"Primitive panpsychism, in addition to answering powerful needs of the soul, was justified by the rules of inference and verification within the available range of experience." That the world was alive was obvious. There was no competing theory.

This reminds me of children and of psychotics, for whom matter is very much alive. But "That the world is alive is really the most natural view, and largely supported by prima-facie evidence."

Even someone as lofty as Aristotle couldn't fully cleanse his mind of animism, and saw objects as "desiring" their own ends. And really, it took until Newton to come up with a better explanation. That's just yesterday in evolutionary terms. And in how many ways do people still cling to a magical worldview?

This reminds me of Freud's belief to the effect that a neurosis is a kind of private magic, whereas religious magic is a public neurosis.

Was human sacrifice just such a public neurosis? Or psychosis? "The rite of sacrifice," says Bergmann, must have met "a deep and universal need, otherwise we would be at a loss to explain its presence in all known cultures." He notes that "From early times" -- indeed, the (circular) time before (linear) time -- people "felt that they must give up something dear to them in order to prevent destruction by an envious or jealous god."

"Primitive cultures were haunted by a fear that it is dangerous to eat a hunted animal or harvest a crop without giving some of it back. One who does not sacrifice will be persecuted, punished; the soil will become barren; no animal will be hunted successfully. In further developments this feeling expands into a belief that the harmony of nature depends on periodic sacrifice."

In any event, "this suggests an exceptionally deep cultural anxiety, because not even the continuance of time could be taken for granted."

Reminds me of mad old Chronos devouring his son: 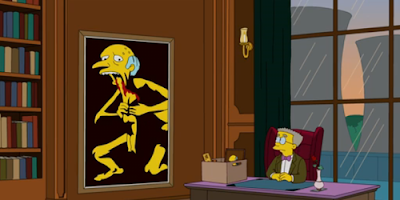 Now, from whence comes the envy and jealousy? Well, where does it ever come from? From the psyche of man, only projected outward, into gods. The gods must have served as fixed receptacles for otherwise unruly projections: they were a "place" to put one's greed, envy, aggression, etc. They were a way to manage Thoughts that didn't yet have a proper Thinker.

Have you seen one of those deranged Keith Olbermann Resistance videos? That's the kind of raw and primitive emotionality we're dealing with here. It bears no relationship to the external world, but is simply a way to deal with one's own persecutory thoughts and emotions. Better that they live in Trump than inside Olbermann's own head! Note that he signs off each paranoid rant with an open-handed "peace." That's what you call "reaction formation," a complete reversal of his own psychic truth.

Let's get back to God's Gamble. "One could say that God's great gamble was in giving humans freedom..." However, "it was a necessary gamble" without which the giving of love and seeking of truth would be impossible.

It is to these and other transcendentals that humans are properly ordered. But we are always free to turn away from them, hence the Fall: "freedom can be used to rebel against the very order that is indispensable to the exercise of freedom," occasioning the descent into "violence and madness."

The other day I noticed this headline: $1,570,000,000,000: How Much the World Spent on Arms this Year. That's 1.57 trillion dollars. Why so much lethal force? To attack, and to protect us from, other humans. That's a lot of cash, but it is just a measure of how much violence and craziness we're dealing with.

Back into the wayback machine: "What the first fallen humans needed far more than they might have needed garments to protect them from the elements was something to protect them from each other, which is precisely what archaic religion did for our most ancient ancestors. That is to say, it allowed them to exert a degree of ritual control" over the violence.

And it was much cheaper.

Was human sacrifice just such a public neurosis? Or psychosis? "The rite of sacrifice," says Bergmann, must have met "a deep and universal need, otherwise we would be at a loss to explain its presence in all known cultures."

Veering back toward the Bible, it's interesting that in the OT when the Israelites were worshipping other gods, the point is made over and over that what they worship - stone and wood - was not real, and had no capacity to act. In other words, they were projections that allowed for people to have an excuse, or even an imperative, to do whatever they felt like doing. So long as what they felt like doing was horrible.

Even so, it was known then and made pretty explicit by the Man himself that there is an adversary, one who delights in encouraging people to head in that direction. Man certainly has plenty of developmental and psychological reasons for human sacrifice, but the older I get the less inclined I am to believe that those are the only factors. Just as we need a hand up beyond anything we could achieve on our own, there is another hand that is only to happy to drag people farther down than they could ever have managed of their own volition.

Which is to say, the newforming psychology was necessary to conceive of ritual human sacrifice, but is it sufficient for the massive scale on which it is all-too-often performed?

Food for thought. It seems that the psychic space we entered at the dawn of humanness was already inhabited by certain spiritual entities.