And the Weird Became Flesh

Just a short post, because I have a cold...

As you know, I regard the neurologically immature human infant as the hinge of pneumacosmic evolution. Without the invention of the helpless human baby, there would have been no way to exit mere animality. Rather, we would be immersed in the senses and engulfed in the world, just like the other beasts.

For the longest time, I encountered no other writer who placed infancy in this cosmic context. So imagine my surprise when I found that Balthasar and Ratzinger -- maybe the two greatest theologians of the 20th century -- did the same.

For example, in this beautiful passage from Life Out of Death, Balthasar writes of how

The little child opens wide eyes at the world. What he sees -- forms, colors, sounds... -- he does not comprehend. The phenomena are neither familiar nor strange to him because he cannot yet apply them to himself. His self is not yet disclosed to him; whatever consciousness he possesses lies halfway between subject and object.

Now this is the true miracle among all these miracles of the beginning [by which I think he means that any kind of radical genesis is a miracle]: that one day the mother's smile is recognized by the child as a sign of his acceptance in the world and that the center of his own self is disclosed to him as he returns the smile. And because a You has found him, all the He that also surrounds him can be included in the relationship of familiarity (emphases mine, ellipsis in original).

The language is simple but the truth(s) it conveys could hardly be more profound. For this how God makes a human, one at a time, both today and in the past.

Mere Darwinism can't explain it, because a merely genetically complete Homo sapiens can never breach the walls of humanness in the absence of the Loving M(o)ther. So obviously, loving mothers and helpless babies had to co-arise; and given the time and energy it takes to care for a helpless infant, the father had to be there too.

Thus we have the image of concentric circles, with the baby at the center, surrounded by the mother, and with the father's protective arms encircling them. And of course, it couldn't have been accomplished without culture either, so you can add another circle. And there is no culture without cult, but that's getting a little far afield for our present purposes. Let's get back to the quote.

At first, the baby doesn't comprehend the world into which he has been thrown -- not just the exterior world, but the interior world which registers it. It is very much as if the world is all periphery and no center. Things just happen, with no continuity or point of reference. You might say that we "suffer" the world-sensations in a purely passive way. It's non-stop catastrophic novelty (which I think goes to grown-ups who retain an element of neophobia).

"Whatever consciousness he possesses lies halfway between subject and object." He's not yet a self, nor is there a stable or fully formed recognition of the other, so it's a strange world indeed. You would probably have to take LSD to simulate the experience of such radical novelty. No wonder babies cry!

I remember back in the day, reading a book on just this subject, i.e., taking LSD in order to regress to infancy and try to resolve one's issues. In the midst of a trip, people would draw their infanitle experiences. I wonder if I can find them online? Of course. 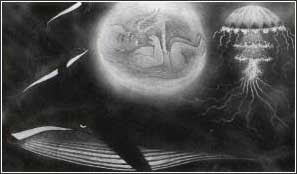 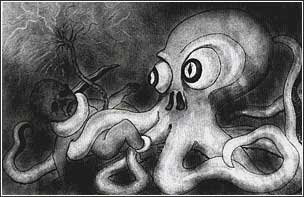 Here's someone who seems to have had a bummer of a prenatal ride: 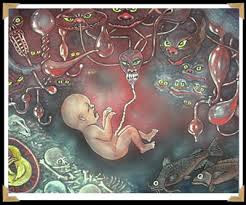 Anyway, the trippiest part of it all is how there is no I without a You. It's full of delightful orthoparadox, because the other You is really her own I, so becoming human is really an intimate mater of seeing things I to I. In the absence of that experience, we will remain at the periphery of ourselves, -- and of the world -- constantly persecuted by malevolent, unmetabolized experience.

In a certain way, human development -- i.e., individuation -- is always an ongrowing centration; not in the sense of being self-centered, because if things proceed the way they are supposed to, then the deepening of the self leads to a deepening of everything else, including one's ability to compassionately identify with others. The grandiose and brittle self-centeredness of an Obama would represent the pneumagraphic negative of what is supposed to happen in development.

Now, all of this has the most urgent religious connotations, because this whole situation reveals something essential about how God rolls. Yes, we are the image-and-likeness of God. But God is not a static thing!

Rather -- just for starters -- in God, the Father ceaselessly begets the Son, or gives birth to the Word. Thus, it ultimately explains how "finding God" and "being found by God" are the same thing (like finding mother and discovering oneself in the bargain).

In any event, the extremely weird situation revolving around the premature, neurologically incomplete and helpless baby turns out to be the only way I can think of to create a being in the image and likeness of an ec-centric Creator who is always lovingly giving away his own center.

The Cosmic Baby, blissfully floating before the fleeting flickering universe, stork naked in brahma daynight, worshiping in oneder in a weecosmic womb with a pew...: 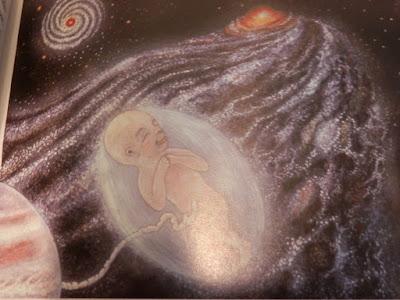 "Anyway, the trippiest part of it all is how there is no I without a You. It's full of delightful orthoparadox, because the other You is really her own I, so becoming human is really an intimate mater of seeing things I to I. In the absence of that experience, we will remain at the periphery of ourselves, -- and of the world -- constantly persecuted by malevolent, unmetabolized experience."

"Now, all of this has the most urgent religious connotations, because this whole situation reveals something essential about how God rolls. Yes, we are the image-and-likeness of God. But God is not a static thing!"

Unfortunately, there are peeps that don't realize this, and thus have opted for a static cling god. If they only would stop and think, they might realize that for God to create He couldn't possibly be static-y.
Which is like getting static on a radio and believing that's better than listening to music, or worse, believing that static IS the music.
I wonder if some people prefer a static god because they despise change?

Somehow the LSD reference seems especially appropriate today. That is a trip. I-You/You-I. One two three.

The little child opens wide eyes at the world. What he sees -- forms, colors, sounds... -- he does not comprehend.

And thus the parables come to mind, because even - or perhaps, especially - adults, "seeing, do not see, and hearing do not comprehend."

Works the other way around too -- premature comprehension can prevent seeing & hearing.

Since I stopped blogging a few years ago, I have been on a really wonderful journey that has recently brought me back to the Catholic Church and a powerful and joyful belief in God. Just recently started reading your blog again, Bob, and it is always full of insight and wisdom. Ratzinger's (i.e., Pope Benedict's) writings have been a source of constant revelation and he frequently quotes Balthasar, whose works I have yet to fully explore. Jesus said : "Truly I tell you, unless you change and become like little children, you will never enter the kingdom of heaven." (Matthew 18:3). The developing child whose identity begins with "You", progresses to "You-I" (reminds me of Kohut and Self Psychology) and ultimately to an "I", may represent in some ways the ultimate communio that we seek in God and that God has in store for us....

Dr. Sanity! How wonderful to see your comment! I don't remember if I commented much if ever at your blog, but it was always a worthwhile and insightful read.

Re. premature seeing and comprehending, a couple of things come to mind: first, in Nazareth when all the people who were sure they knew Jesus - they were close as family, after all - refused to believe he was anything more than a carpenter's son. Second, when the apostles, even in the midst of some pretty astounding miracles, still could not grasp what they were witnessing. Peter walking on the water and ending up all wet, for instance.

Probably a book in there somewhere, or at least a guest spot on The Journey Home.

Hi Dr, Sanity! It's wonderful to hear from you! :)

Profound insights and thoughts, especially given that the brain grows to something like 80 percent of its adult size during the first three years of life. The Big Bang wrought in an infant!

I remember Dr. Sanity, a hobby blog where she’d post, then watch in amusement the comments discussions that came after. Like most bloggers I guess (comments gardeners?). But I also remember Pat Santy the serious former flight surgeon who warned NASA they’d better get their astronaut psychology act better together before doing long range missions.

I’m probably waaaay too late to that party (and waaay OT), but Lisa Nowak... I think people that messed up usually don’t know it and despite trying to delude themselves and others, eventually get figured out before they screw up as badly as Nowak did. But, I’ve met people who are messed up and fully know it, it doesn’t bother them, and they’re really good at hiding it from everybody else. In both cases when they eventually screw up it’s called “a breakdown” or “they just snapped”. But I know better because I’ve seen it. Figuring out the latter kind in advance is never easy. But boy would I love to know how.