Risk-Aversion is a Wreckless Gamble

In Kevin Williamson's highly insultaining Politically Incorrect Guide to Socialism, he buries his axiom into the heart of the left with the following blow: "State control is more important to the socialist than egalitarianism."

As anyone above the political age of seven understands, egalitarian rhetoric is simply the means to an authoritarian end. Even if the compassionate socialist consciously wishes to avoid that end, it is nevertheless inevitable, because Man.

To be a socialist is to not know what Man is. For which reason it is vital to be ignorant of history, psychology, and anthropology (and the anticipatory wisdom of these embedded in religious mythology and metaphysics).

In the same book, Williamson says "the laws of economics can no more be set aside than the laws of physics and biology"; and this is precisely what we've been discussing these last several posts: that there exists economic truth, and that this truth must relate to other truths and ultimately to Truth as such. Which is why we need a word for this multi-undisciplinary approach. Perhaps economystics.

Which needs to be distinguished from the vulgar economystagoguery of the left. What the left doesn't understand is that the free market is already magic. You can't force it to be more magic without inevitably making it less so.

Greece, for example, has spent the last several decades trying to overcome the laws of economics, and to squeeze more magic out of the economy than there is in it. Why?

It must go back to what we were saying yesterday about envy and greed. No matter how much prosperity is generated by the free market, man can always imagine more. But as Socrates said, the unexamined loan is not worth leveraging.

If the free market is the goose that lays golden eggs, it is as if the leftist force-feeds it steroids and fertility drugs while dining out on all the future omelets. Meanwhile the goose just gets sicker and sicker. Obama should be arrested on charges of animal cruelty, for he is flipping a feeble bird to the next president. 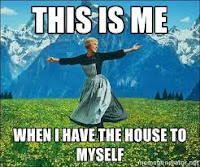 Are we rambling again? Perhaps. The wife and child just left to visit relatives in New York, and I might be feeling a little giddy. It's not like I won't miss them, but I do have the house to myself for the next few days. What's that like? I forget. But it's starting to come back to me. It's like... the hills are alive. Only this time in a good way.

Here's an example of a corollary of Williamson's Law: "A government can't control the economy without controlling people. And [the Founders] knew when a government sets out to do that, it must use force and coercion to achieve its purpose" (some guy named Reagan, in Williamson).

So, let me get this straight: some guy named Obama is holding a gun to my head and telling me to shut the fuck up if I know what's good for me. Isn't that something gangsters do? In the movies?

Here's a politically incorrect thought: the free market is all about risk. The successful entrepreneur turns risk into profits. As such, "Highly risk-averse people do not start businesses."

What do they do -- or not do and call it doing -- instead? Well, at the extreme end, they get government jobs. They get tenure. They join public employee unions. Those are as far from risk as it is possible to be, for these privileged parasites enjoy all the benefits with no exposure to risk (unless their greed ends up killing the host, as in Greece).

After all, they're living off Other People's Money, so there is no incentive to use it wisely. Under normal circumstances, money teaches us how to use it, but only if it is our money. One learns nothing by spending someone else's money.

This outlines four degrees of personal responsibility in descending order. In the first case you're going to be very responsible with your money (unless you're stupid or impulsive or insane), whereas in the last case you have zero incentive to be responsible. Indeed, you can even call yourself charitable and magnanimous at no personal cost. What a beautiful racket!

And guess what: "that's government. And that's close to 40 percent of our national income" (Friedman).

About that beautiful racket, I was reading an article this morning about Hillary's unpopularity, which includes this cranial-slapper: "Most troubling, perhaps, for her prospects are questions about her compassion for average Americans, a quality that fueled President Barack Obama's two White House victories."

Note how the writers -- "journalsts" -- refer to it as an objective quality in him instead of a perception in the eagerly 'bamaboozled mob. Obama's compassion fueled two White House victories? Is that what you call being profligate with other people's money?

Yes. For anyone left of normal.

Back to the idea of risk-aversion. What is the left but a massive institutionalized wish to avoid risk? Now, it is a biologically incorrect truism that girls are more risk-averse than boys.

Which is why, on balance, little girls grow up to be big Democrats, and why Hillary thinks she can be the first person to become president by waging a campaign targeted solely at the dickless of both sexes. It worked for Obama. He lost the white male vote by a glandslide, but it didn't matter. 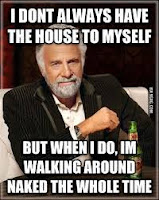 So, what have we learned today? Not much. Probably just this:

To be a socialist is to not know what Man is.

What's that like? I forget. But it's starting to come back to me. It's like... the hills are alive. Only this time in a good way.

And then by the end of the first day, you'll be unnerved by the fact that everything is a little too quiet.

If this post is any indication, writing naked may be a plus.

You've explained why certain extremely wealthy people are leftists. They can greatly mitigate their risk by "investing" in a government that forces people to buy their products or that subsidizes them in the event of loss. Landing a government contract virtually guarantees profit.

Which is why, on balance, little girls grow up to be big Democrats

Unless they get married and start families, at which point reality sets in and many come to their senses...

I am appalled, Bob that you walk around the house naked (I thought I was rhe only one doing that).

If you want the naked truth you must be naked.

I didn't mean to scare the Jehovah's Witnesses. I just forgot.

Same with a naked gun, except, trust me, there ain't no good naked holsters.

Lol, what about the sacred underwear? I hope I wasn't supposed to keep that quiet,
Mrs G

Maybe the sacred underwear was in the wash machine?

Krugman vs. Stephen Moore. Not sure how you even debate a guy who thinks Greece is a success story.

Wow. He argued that Greece is bankrupt because the government didn't spend enough. And that creditors are being too harsh because they don't want to keep pouring money into a black hole.

Julie said "Wow. He argued that Greece is bankrupt because the government didn't spend enough"

They really do believe that words, via the 'correct' concepts, can conjure the desirable reality into place, in place of reality.