In yesterday's post I neglected to include a juicy comment by Moshe Idel, a renowned schola' of the kabbala' (cited in Boyarin), about the two "main vectors" of Jewish mysticism, what he calls the apotheotic and the theophanic streams.

Idel writes that the apotheotic "represents the impulses of a few elite individuals to transcend the human mortal situation through a process of theosis, by ascending on high, to be transformed into a more lasting entity..." This is precisely what I have in mind with the pneumaticon of the circle containing the upward arrow, minus the elite part, which sounds too (upper case) Gnostic (unless we're talking about genuine saints).

"In contrast to this upward aspiration is the theophanic vector, which stands for the revelation of the divine in a direct manner or via mediating hierarchies." This would obviously represent the circle with the downward -- or downWord -- arrow.

I then suggested that perhaps Jesus embodies both arrows. Yes, he is Word-made-flesh, i.e., the Personal Absolute, the descending arrow. However, if he is also "fully man," then we might also regard him as the quintessence of man's ascending energies. Or in other words, he is lost and searching for God, just like the rest of us. In fact, this is hinted at in Matthew 1:23, where it says they shall call His name Immanuel, which is translated, 'God with us.'

In other words, not just God in or above us, but with us. Which can be quite consoling. Yes, he may be the harbor, but he's in the same boat with the rest of us (perhaps most dramatically in the garden at Gethsemane). 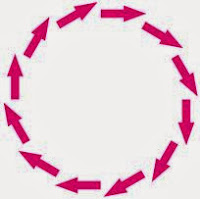 It seems to me that certain theologies exclude one movement at the expense of the other. For example, certain strands of Protestantism insist that there can be no ascent from our side -- that we are so corrupted by sin that we cannot help ourselves. Rather, God's descent is both the necessary and sufficient cause of our salvation, and there's not a thing we can do or not do about it.

Granted, the universal church has always been mindful of the heresy of Pelagianism, which pretends that man can save himself without divine aid -- that he can ascend to the toppermost of the poppermost without God meeting him more than halfway.

Now, all heresies contain an element of truth, only overemphasized or out of proportion to the totality of revelation. Thus, in point of fact, Pelagianism is no more or less heretical than its polar opposite, predestination.

At the end of yesterday's post, I alluded to Schuon's comment to the effect that Jesus is simultaneously God's icon of man and our icon of God. If that is the case, then this icon must always include both arrows, the ascending and descending, since they are both (quintessentially) present in Jesus.

In the West, we know all about the descending arrow. But in Eastern Orthodoxy, I find that they give equal emphasis to the ascending arrow, to the apotheotic stream. You might say that they consider Jesus from the perspective of savior, but also from the angle of -- gulp -- guru. So to speak. They would no doubt prefer the term starets, a person who

"functions as a venerated adviser and teacher. Elders or spiritual fathers are charismatic spiritual leaders whose wisdom stems from God as obtained from ascetic experience." [Why, for example, do we read of Jesus' asectic experience during those forty days in the desert?]

"It is believed that through ascetic struggle, prayer and Hesychasm (seclusion or withdrawal), the Holy Spirit bestows special gifts onto the elder including the ability to heal, prophesy, and most importantly, give effective spiritual guidance and direction. Elders are looked upon as being an inspiration to believers and an example of saintly virtue, steadfast faith, and spiritual peace."

(This would be consistent with Jesus' question and comment -- I'm paraphrasing -- "why do you call me good? There is no one good but God.")

Note that in the Gospels, this is how the disciples most frequently approach Jesus. In other words, they don't usually approach him as God, but as rabbi, teacher. Indeed, he shared all sorts of practical spiritual and ethical advice, things that would be utterly useless to us if predestination were the case. I mean, why pray, why evangelize, why obey the Commandments, if it makes no difference to our salvation?

Boyarin suggests that in Mark -- the earliest Gospel -- we can see most clearly the two trends, as if they hadn't quite yet been harmonized: "It is almost as if two stories have been brought together into one plot: one story of a God who became man, came down to earth, and returned home, and a second story of a man who became God and then ascended on high."

And why not? If Jesus represents a new category of being (both arrows), then naturally it will take awhile for human beings to work it all out.: "ahh, right: God and man. Man and God." It actually took centuries to nail down the right balance.

So, Jesus saves. But Jesus also teaches us how to be saved. Like how? One memorable book that touches on this is Christ the Eternal Tao. Since I don't remember those memorable details, let's dig it out and find out what it says. However, I can tell you ahead of time that it contains some of the same information presented in chapter four of my book. No, I didn't plagiarize anything, aside from plundering it for all it is worth.

Here it is, chapter three, Watchfulness. Hieromonk Damascene reminds us that we always "carry within ourselves the inclination and habit to return to our former condition," and that "if we do not preserve, guard and cultivate the seed of Grace given to us, we will be deprived of its vivifying power."

Or in other words -- or symbols -- no (↑), no (↓). But it should go without saying that no (↓), no (↑), either. Two sides of the same movement. Thus, "In order to preserve the Grace and not return to our former delusions, we must continuously, day by day, minute by minute, unite ourselves with the Way in metanoia."

I'm way behind in my work. To be continued...

I don't have much knowledge of Orthodoxy, but I do know of one staret, though I doubt he'd call himself that. You can see it, though, both in his posts and in the way his commenters address him.

There was a post not long ago, maybe the Creation and Evolution one, (I'll have to reread it), that just didn't even sound like his usual voice. It came from a deeper octave.

Thanks for the link, Julie. Good stuff there.

In that same regard, I so appreciate Romanos.

Thanks, Joan. That's a new one to me; good stuff there, too.

The second post there, on blind faith, rings a few bells for me.

...that we are so corrupted by sin that we cannot help ourselves.

I had a pastor friend I used to argue with over this. "You're dead," he'd say. "What can a dead man do?"