No Judgment, No Thinking, No Justice, No Equilibrium, No Peace, No Slack

On to Chapter VIII, Justice. 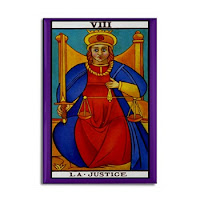 There are different forms of justice: legal justice, spiritual justice, and, of course, "social justice," which is a god-term invented by the left to signify getting what you want while avoiding what you deserve.

More generally, Social Justice is one of the best disguises for envy ever devised by the cunning of man. It is essentially the denial of the first two forms of justice, AKA Justice.

But real justice doesn't require being unjust to another, as in, say, affirmative discrimination, or Title IX, or Obamacare, or the Community Reinvestment Act, or the federal minimum wage, or the perpetual imposition of the Voting Rights Act of Almost Half a Century Ago (as always, "progressive" means permanent solutions to temporary problems. Like suicide, only not painless).

Don Colacho has many fine aphorisms on the subject: "To corrupt the individual it suffices to teach him to call his personal desires rights and the rights of others abuses." The LoFo (low information) left consists of "individuals dissatisfied with what they have and satisfied with what they are." "The left claims that the guilty party in a conflict is not the one who covets another's goods but the one who defends his own." "Instead of demanding the repression of envy," the left "demands that we suppress the object which arouses it."

This is why so many on the left mourn the death of Hugo Chavez. It doesn't matter that this disgusting pig was an authoritarian thug who siphoned 100 billion out of the economy. He was for social justice! Plus he hated America, and that's just 'batnip to the left. There's a spot for him next to Arafat in leftist heaven, i.e., hell.

Tomberg points out that to think is to pronounce a judgment and to therefore render justice. Indeed, in order to make any sort of declarative sentence at all -- e.g., "Chavez was a man, unfortunately" -- we must exercise judgment.

The totolerantarian left prides itself on being "non-judgmental." Since thinking and judgment involve the same act, this is nothing less than a refreshing self-condemnation of their own critical faculties. It answers the question of why their ideas are so confused and why their policies begin and end in injustice: because they have renounced thought.

This also explains why their writing is such a mess, since logic is implicit in the proper use of language. If only they could learn to express themselves properly, truth would surely follow. But that would be deadly to their ideological fantasies, so the bad prose must continue. There is no James Taranto on the left, nor any Charles Krauthammer, Thomas Sowell, George Will, Ace of Spades, James Lileks, PowerLine, Roger Kimball, Sultan Knish, or a thousand other clear thinkers and therefore writers.

The left says: no justice, no peace. We back it up a couple of steps, and say: no judgment, no thinking, no justice, no equilibrium, no peace in which to hear myself think and judge.

And of course, in reality leftists are obnoxiously judgmental, which is a degraded caricature of judgment. But since they are not permitted to recognize this in themselves, they project it into conservatives.

One of the banes of the modern world is that science has become conflated with thinking, when it is actually just a tool of thought. Thus, proper thinking does not reject science, but nor does it turn science into an idol.

As Tomberg writes, the application of science has resulted in three singular discoveries; first, the fact that this is an evolutionary (which is not to say "Darwinian") cosmos; second, that matter reduces to pure energy, or patterned information; and third, that the consciousness of the surface ego is but a local phenomenon floating within (actually, "outside") an upper and lower vertical which are nonlocal.

Whereas science is "public" and "general," esoterism is private and particular. In short, no one else can make its discoveries for you. This is knowledge that cannot simply be "given" to you. Rather, it must be undergone -- at times even "suffered" -- so that in each person it will have a slightly different inflection but nevertheless be "objective." This is a critical point.

It should be axiomatic that only a person may synthesize religion and science. Religion cannot do it. Nor can science do it. Thus, the esoterist engages in a "double discipline": he prays and he thinks. Or he "thinks on his knees." In so doing, he is able to "redeem" whatever it is he successfully assimilates into his person (when you think about it, Jesus did the same thing, only on a macrocosmic scale).

This is how perception and thinking successively disclose a real Cosmos worthy of Man. And to say that we move from appearance to reality is not to say that reality is a function of perception, as maintained by the newage.

In reflecting upon Chapter VIII and then rereading and rewriting this post, I see that I've left quite a bit out. However, I'm so preoccupied with another form of judgment, or "aesthetic justice" -- i.e., trying to make my way through 2,000 pages of Christopher Alexander -- that I'm a little distracted. The older I get, the harder it is to think of eight things at the same time. But it's a good question: does beauty have any intrinsic rights in this world, or must it go the way of truth and justice?

Related analysis of the relationship between mental closure and injustice in the left.

But it's a good question: does beauty have any intrinsic rights in this world, or must it go the way of truth and justice?

There are some pretty lies, but genuine beauty has a glory to it that the superficial lacks. It's like a gold-plated coin versus a solid gold one. You may not be able to see the difference, but you can feel it. So in the end, without truth, justice and the American way, there can't be any beauty. It has to go all the way through.

...the left "demands that we suppress the object which arouses it."

I'm thinking of those females who do the "slut walks". Oddly enough, they do tend to suppress any thoughts I have regarding relations.

But maybe we need "One-percent walks" where we all dress up like Gordon Gekko or Donald Trump. Perhaps it is not enough for us to ask to be left alone. We may have to rub their faces in how disdainful we are of their guilt-mongering.

I was just thinking that for feminists, auto-castration is the new chivalry.

I think it's more of a sacrifice for some than others. For most of the left, it's no big deal anyway.

Yeah - castration isn't a problem for those men without test's who never grew a pair to begin with...

"One of the banes of the modern world is that science has become conflated with thinking, when it is actually just a tool of thought. Thus, proper thinking does not reject science, but nor does it turn science into an idol."

Confronted with a complex human artifact like a watch, William Paley inquired into the source of its complexity. Insofar as such a complex object is unlikely, Paley reasoned, its existence can be explained only in terms of a human act, one in which material objects (gears, springs, levers) are deliberately arranged in a particular configuration. The same pattern of observation and inference, Paley went on to argue, indicates that complex biological structures are likewise the products of a deliberate act of design, the designer in such cases being the Christian deity.

Darwinian theorists accept the first of Paley's inferences, but reject the second. Biological artifacts are complex, they say, but not designed. Their existence may be explained in terms of random variation and natural selection. I dispute this claim, without endorsing Paley's theological inference. It is not necessary to choose between doctrines. The rational alternative to Darwin's theory is intelligent uncertainty.
~ David Berlinksi

Reminds me of a Colachoism: "God is the transcendental condition of the absurdity of the universe."

Which, if I understand him correctly, suggests that the absurd irrationalism of radical Darwinians can only be understood with recourse to God.

YAY Bob, superlative per usual
What did we do to deserve such daily worthy mirth & heavy mental?

Meanwhile from our Music on Architecture Dept:
a sonGE

Ge, I was thinking the same thing at 2 this AM as this post was still working on me.

I forget why I was thinking about JAWS again but then it struck that the hero of that movie, Chief Browdy, really integrates so many if not all of those qualities listed above, especially when one thinks about how each other character was trying to con-vince Brody of "something" (make a claim on his life, in a sence). And how beautifully he negotiates his way with them with the qualities integrated finally at the end especially with "creativity and precision" as his bullet meets his invention. And he literally did this thinking on his knees (at the top or end of Orca's mast)..
Contrast this hero with Frodo and as much as I love him, I do not see that many of those qualities exhibited.
Also, Brody is a reason-able man, no doubt. Is this quality in the list?

Mushroom said "I think it's more of a sacrifice for some than others. For most of the left, it's no big deal anyway."

Julie said "Yeah - castration isn't a problem for those men without test's who never grew a pair to begin with..."

Thanks guys, I needed that!

(wish I weren't so damn busy)

Beauty has no rights in this world; it is bought and sold as a commodity. Its nature is disputed. Its value is negotiable.

Johnny Cash has it about right:

It seems fitting that beauty has no rights; rights link to necessities and beauty is superfluous; an artifact of freedom.

Not ironically, ugliness is also an artifact of freedom; of freedom wasted.