The Joy of Unknowing

It cannot have been easy for early Christians. First of all they weren't yet Christians, but rather, deviant messianic Jews. Except this messiah had appeared in a form no one had anticipated, nor would anyone invent, because the story is just too implausible, most especially for Jews. I mean, if you're going to invent a religion, why invent one that's more than a little incoherent (on the surface) and difficult to reconcile with your existing one? 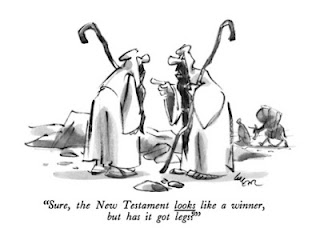 Here is what I mean -- or rather, Voegelin means. As alluded to yesterday, one of the purposes of scripture -- or of a closed canon, more precisely -- is to protect and preserve the insights disclosed by the revelation.

You can't let just anything into the canon, or the revelation will become as diluted and undiscerning as the Rock and Roll Hall of Fame. I mean, Billy Joel? C'mon. And what's Miles Davis doing in there? Talk about mixing up revelations. While you're at it, why not put Babe Ruth in the football hall of fame?

For Christian R & D there was a two-pronged challenge: first, to reconcile it with the existing scripture, second, to the wider world (or vice versa, if you like, i.e., world to revelation). With regard to the latter, for various reasons it was necessary to develop "a theology that mobilized for the defense of truth the arms of the intellectually superior and for that reason most serious competitor, of Hellenistic-Roman philosophy" (Voegelin).

In other words, man has -- and in many ways is -- a mind, and has every right to a revelation that speaks to its depths, and certainly doesn't devalue it. So early Christians went about the task of assimilating both Athens and Jerusalem to the new revelation.

A similar thing occurred with Judaism in the form of Philo Judaeus, who was not only a contemporary of Christ (though there is no evidence he knew of him) but a later influence on many of the early Fathers. (Then again, according to McGinn, "Christian legend has him meeting St. Peter in Rome!")

As Andrew Louth writes, "Starting from an idea of God without parallel in his philosophical milieu, Philo develops an understanding of the Word that sees meditation on Scripture, that is, God's self-disclosure, as central to the soul's search for God. This is quite new -- something that the Christian Fathers were to take up and make their own."

One of the reasons for this is Philo's emphasis on the Divine Word, i.e., Logos, "as an intermediary between the absolutely transcendent and unknowable God and the human soul" (McGinn).

The following passage by Philo is pretty striking if you're into cosmic coonspiracy theories: "To his chief messenger and most venerable Logos, the Father who engendered the universe has granted the singular gift to stand between and separate the creature from Creator." This Logos-gift is "midway between the two extremes, serving as a pledge for both."

The logos is God turned toward -- and in a way into -- man, so to speak. It is "immanent in all things, but in a special way in the human mind," i.e., "within the higher dimension or nous" (ibid).

McGinn agrees that Philo "was the first figure in Western history to wed the Greek contemplative ideal to the monotheistic faith of the Bible," a feat which some have welcomed, others have condemned. Me, I welcome truth in whatever form it comes my way.

Philo obviously had the same liberal attitude. He made no apologies for using "the best Greek philosophy both apologetically, that is, to prove that Judaism was the true religion, and speculatively, that is, to draw out [its] inner meaning..."

This "reconciliation was achieved not only by seeking a deeper and more universal meaning in the scriptures, but also by transforming Platonic contemplation into a more personalistic mode" (ibid.).

Universal and personalistic. I'm all over that. This itself is a provocative and spicy combination of modes that one might think of as being at antipodes.

In other words, to say "universal" is to exclude the particular, and the individual is nothing if not particular. I always compare it to jazz, which takes the universals of music and expresses them in a uniquely individual way via spontaneous composition, i.e., improvisation. So when I say I'm "winging it" here, that's actually what I mean. I try to work with universals but give them my own spin -- which is a way of understanding them from the inside-out, with the whole of one's being.

It's like a quest or something. An adventure of consciousness. But "there is no guarantee of success on the quest: for God must reveal Himself, and the soul can do nothing to elicit this disclosure -- it can only prepare. But even so, the quest by itself is sufficient satisfaction. One might say that the quest is the goal and the goal is the quest" (Louth).

And as Voegelin is at pains to emphasize vis-a-vis our "in between" status, "the quest is never-ending -- the goal is always beyond because God is infinite and incomprehensible." Nevertheless, "the quest is joy in itself." As such, "Philo can be seen to have developed a mysticism of love and yearning for God in himself, in his unknowability" (ibid).

"... for God must reveal Himself, and the soul can do nothing to elicit this disclosure -- it can only prepare."

And isn't that the essense of it all - that God is the initiator and we are to make ourselves ready. We have to be quiet and expectant in our dependence.

It's a beautiful thing.

Yes, wait for the Incarnation, really.

Waiting for the miracle.


When you've fallen on the highway
and you're lying in the rain,
and they ask you how you're doing
of course you'll say you can't complain --
If you're squeezed for information,
that's when you've got to play it dumb:
You just say you're out there waiting
for the miracle, for the miracle to come.

If it weren't for the realization part along with the hoped-for unification part I would walk away from the purification part -- it is absolutely no fun!

Your book, your blog and all the great commenters have been my constant companions!
Thanks so very much.
Sean

This "reconciliation was achieved not only by seeking a deeper and more universal meaning in the scriptures, but also by transforming Platonic contemplation into a more personalistic mode"

The reflection of that here on OC is one of the things that draws a lot of readers -- probably some the trolls, too, whether they realize it or not. Despite the fact that the last couple of popes understand it, it's actually pretty rare in Christianity these days -- at least in my experience.

It just occurred to me that, as of today, it's been SEVEN YEARS of blogging. I wonder if anyone since then has blogged more words? And why does it feel like it's gone by much faster than four years of high school?

Yeah, Lileks. But he takes two weeks off for Christmas, at least a week during summer, and has lots of pictures.

Seven years?! Wow - happy blogiversary! Weird - I've spent more time reading here than I ever did at any school. You're right, it went by a lot faster.

I don't think anybody even comes close. Steyn has -- as my mom would say -- a lot of words, but he re-runs a lot.

High school isn't a fair comparison, and I never did any other significant stretch of hard time.

More OT, if anyone is interested in a few minutes of harmless diversion -- try the Jungian word pair test here

Just pick your gender from the dropdown.

I found out I was an introverted engineer. Shocking.

Interesting, but on some of those pairs it would be nice to be able to pick a middle ground.

About a decade and a half ago, my husband (then boyfriend) and I both took the longer test and came up inxp.

The Gospels fail to note that by Jesus' time Judaea had been under Greek political, economic and cultural domination for almost 300 years. Jews outside Judaea read and spoke Greek and used the Greek Septuagint in their services. One of the lines on Jesus' Titulus Crucis is in Greek.

It is certain that educated Jews like Paul and Philo and others were familiar with Greek philosophy and the philosophers' Godhead, and since they were addressing a largely Greek audience they must have used Greek philosophical concepts.

That reminds me, wasn't there some kind of theory about seven year cycles?

Bob, even if you're not paid by word, you should know you have inspired by Word. :)

"...Philo develops an understanding of the Word that sees meditation on Scripture, that is, God's self-disclosure, as central to the soul's search for God. ..."

As noted the other day,

"Become as children. Interesting word, become. It means to come into being. You wouldn't say be a child, much less regress to childhood. To become implies bringing something new into existence, not reverting to a previous stage. A child is a person to whom one gives birth."

Isn't the 'joy of unknowing', in a sense, an act of becoming? Becoming the basis for becoming? And receiving? Becoming empty so that the cup of logos can be filled all the way to the brim?

In semi-whacking a semi troll yesterday, he said he didn't need to search for answers anymore, he examined his positions from all angles and already had the answers he needed.

Not too surprising, right? Searching implies that you know what it is you are looking for, can describe it, etc, no big surprise that you find it.

I'll stick with exploring and examining what is found along the way, being careful to draw the map to match the terrain & not the other way around, colonizing as I go... getting through the fever swamp is a much simpler proposition that way.

Thank you for sharing with us. I hope we never take it for granted.

Good grief; once again there's no free will, just parasites. Oddly, the author seems almost to imply that our genes themselves act like parasites.