It is Not Good that Man Should be Allone

Let's think through this notion of "person," which is so central to Christian metaphysics -- at least to the metaphysics of thinkers such as Ratzinger, Balthasar, and Wojtyla, plus some others I've read recently, such as Norris Clarke and Henri de Lubac. Each, in his own way, would say that Person is the ultimate category.

In purely abstract terms, person is covariant with centration. De Lubac illuminates this aspect of the problem:

"[W]e find that the higher a living thing rises in the scale of being, the more internal unity does it acquire." In contrast, "the undifferentiated, entirely homogeneous being is as little one as it is possible to be." Rather, the latter "is only a nameless agglomeration."

Therefore, the first thing we need to understand is that one -- or oneness, rather -- is located at the top of of the scale, not the bottom.

The infant, for example, when he is fed, dry, and comforted, is presumably "at one" with the cosmos. But this represents a very simple, or shallow, degree of oneness. As human beings grow and acquire more "parts," it becomes increasingly difficult to pull off oneness while retaining the achievement of identity.

De Lubac notes that in certain plants, "unity is so weak that every piece cut from the stalk produces a new plant." Each part is its own potential whole, so to speak.

The inverse obtains in something as complex as a human being, where each part supports the unity of the whole. A tooth is quite different from a toe, but each has its specific role to play.

Likewise, unlike earthworms, you can't cut someone in half and expect each half to grow into a separate person (unless the division happens during the very early and undifferentiated blastocyst stage).

Transposed to the psychic level, "True union does not tend to dissolve into one another the beings that it brings together, but to bring them to completion by means of one another. The Whole, therefore, is not the antipodes, but the very pole of personality" (ibid).

Thus, two errors need to be dispensed with. The human being is not an idealized individual -- as believed, say, by libertarians and objectivists -- but nor is he subordinate to a collective blob, as believed by leftists.

Rather, to be a person is "fundamentally to enter upon a relationship with others so as to converge upon a Whole." The chronically rebellious individual is just the other side of the slavishly conformist liberal, because both are equally repelled by real intimacy and communion.

This process of differentiation and union can only occur in time, hence the centrality of history to Christian metaphysics: "since the flow of time is irreversible nothing occurs in it more than once, so that every action takes on a special dignity and an awful gravity; and it is because the world is a history, a single history, that each individual life is a drama" (emphasis mine).

Again, this single drama is the drama of awakening to the cosmic person. Or, in the words of the title of another book we've been discussing, the cosmic movement runs from big bang to big mystery.

Thus, the person is ultimate, but with an important caveat: that there can be no person in the absence of other persons. Personhood is always, and can only be, a result of ex-change with other persons.

Therefore, just as there is a total biosphere, and beneath that a total system of physics and astrocosmology -- there is a single system of personhood. Call it the "psychosphere," or "pneumasphere" if you like. But we like to call it the cOʘnosphere.

At the center, or bottom, or ground, each person is simultaneously centripetal and centrifugal, within which we may "discern the stamp of the creating Trinity," like so: 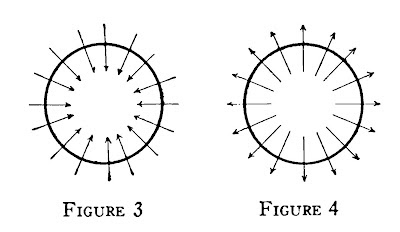 "There is no solitary person: each one in his very being must give back to all.... It is like a two-way method of exchange, a twofold mode of presence." And "a person is a whole world," except that "this 'world' presupposes others with which it makes up one world only" (ibid).

De Lubac quotes Augustine, who asked, What is more yours than you? Yet what is less yours than you if what you are is from another?

Good question. I'm running out of time, so I'll just get to the upshot of it all, except that I'm going to take the extreme liberty of replacing certain words with empty pneumaticons, so as to not alienate non-Christian readers:

"By revealing O and by being revealed by him, ʘ completes the revelation of man to himself. By taking possession of man, by seizing hold of him and penetrating to the very depths of his being (↓) makes man go deep down within himself, there to discover in a flash regions hitherto unsuspected. It is through (↑) that the person reaches maturity, that man emerges definitively from the universe, and becomes conscious of his own being."

By revealing O and by being revealed by him, ʘ completes the revelation of man to himself.

There's a long tradition regarding the imitation of Christ in the Church. I prefer the term "identification" to "imitation". The quote above is more in line with how I think it is supposed to work. Christ identified with us giving us the revelation both of who God is and who we are.

Or interiorization or assimilation...

"By revealing O and by being revealed by him, ʘ completes the revelation of man to himself. By taking possession of man, by seizing hold of him and penetrating to the very depths of his being (↓) makes man go deep down within himself, there to discover in a flash regions hitherto unsuspected. It is through (↑) that the person reaches maturity, that man emerges definitively from the universe, and becomes conscious of his own being."

Once again, I'm reminded of the transformation of caterpillar into butterfly.

The ongoing series by Father Stephen, on the ego vs. the heart, may be apropos:
http://fatherstephen.wordpress.com/2012/06/24/evangelism-and-the-ego/

"Thus, two errors need to be dispensed with. The human being is not an idealized individual -- as believed, say, by libertarians and objectivists ..."

Heh, good luck with that. On the bright side, it does stand out as a red flag to those entering their ideas that 'something's amiss here.'

"The chronically rebellious individual is just the other side of the slavishly conformist liberal, because both are equally repelled by real intimacy and communion. "

What's really interesting is how they re-cognize eachother in just those roles.

Almost as if they need each to play the other part, in order to play their own.

When I look at a chimp, a dolphin, or a dog, or any other creature that is intelligent, it is quite clear that the other creature is less than me. I like my dog, and have a sort of relationship with him, but in the end, he is not going to read MOTT with me, make love or music with me, or help me deal with issues. He's good at playing with a tennis ball and acts like a friendly pack animal. That's about it.

In chimps there is great family resemblance, so there is indeed something haunting about their returned gaze. But my human sense of "I" could not arise by prolonged interaction with a chimp. This can only happen with my mother, father, and other humans. With them the other gaze is a commensurate "I," which is the only gaze that can be a productive relation for building a sense of identity. What's more, if this interaction is loving and not harmful or smothering, it can be creative.

At some point however even these human interactions will be incommensurate with our deepest longings, not because they lack value, but because they are limited in various ways, and so incommensurate with the scale of our desire for complete understanding and perfect relation. For that, we turn to God. The interaction with God alone is infinite, an ever-expanding mysterium of relation, and this alone satisfies and dissatisfies, leading us both inward, outward, and in every direction.

Is this another way of saying what this post is saying?

What the post is saying, or what your comment said? If the latter, there are an infinite number of ways to say it, but you said it perfectly well. Man is uniquely proportioned to ultimate reality, so nothing short of ultimate reality is adequate to his ontological, epistemological, and emotional needs. As Schuon says, "Our intelligence is made for the Absolute, or it is nothing." There can be no middle ground: O or ø:

"If it were necessary or useful to prove the Absolute, the objective and transpersonal character of the human intellect would be sufficient as evidence, for that same intellect testifies irrecusably to a purely spiritual first Cause, to a Unity infinitely central but containing all things, to an Essence at once immanent and transcendent."

So, "total Truth is inscribed, in an immortal script, in the very substance of our spirit."

You might say we are condemned to transcendence, which hints at the supreme irony of Crucifixion in its universal sense.

This is very like Don Giussani's point that only communion with Christ (God) truly liberates human being.

Giussani's supporters tell me that this thought had a powerful effect on their temperaments. Instead of feeling submissive, they feel invited. Instead of introverted in the Church, they feel extroverted in the World. They feel like God is both in front of them and behind them, so that He has their back, so to speak. This they feel enables them to venture confidently both into the world and toward the transcendent horizon.

That is, they don't feel like Kierkegaard's persona (I forget which - Climacus?) who looked at Abraham with fear and trembling, who couldn't, like Abraham, make the "leap" of faith. Climacus is always on the edge of a cliff. Giussani's students are always walking in a field which has no limit, maybe a bit like the Sioux. The temperamental difference is striking.