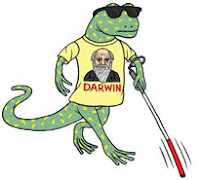 Charles the Queeg has now banished PowerLine due to their well-known fascist associations. This follows the de-linking of other smear merchants and fascist sympathizers such as Ace of Spades, Iowahawk, Gateway Pundit, Jammie Wearing Fool, American Thinker... Who's left to sap and impurify Queeg's precious bodily fluids?

It all reminds me of Bob Dylan's Talkin' John Birch Paranoid Blues:

Well, I was feelin' sad and feelin' blue,
I didn't know what in the world I was gonna do,
Them creationists they wus comin' around,
They wus in the air,
They wus on the ground.
They wouldn't gimme no peace...

So I waited most patiently
'Til I could register with the Lizard Society,
Got me a password and on I logged,
And started off a-postin' on Charles' blog.
Yee-hoo, I'm an LGFer now!
Look out you creationists!

Now we all agree with Kos's views,
Even though he does hate all them Jews.
Sure, he thinks AmeriKKKa's imperialistic,
But at least he ain't creationistic.

I wus lookin' high an' low for them ID'ers but to no avail,
I even looked inside my ponytail.
I hunted down every creationist troll,
Finally found one inside my toilet bowl.
He got away...

Well, I wus sittin' home alone an' started to sweat,
Figured they wus all over the internet.
Peeked behind my big mainframe,
Got a shock from my feet right up to the brain.
Them creationists caused it!
I know they did.... them hard-core, Discovery Institute ones!

Well, I quit my job so's I could stay indoors,
And spend all day a-postin' in my drawers.
Followed some clues from an Air America station
And discovered there wus God in the Declaration!
Dang that ol' Jefferson...

Well, I investigated all the blogs in my sidebar,
But ninety-nine percent was to the right of Bill Maher!
I banished all them bloggers that I used to link,
'Cause they was about as kosher as Colonel Klink!

Now Gagdad, he's a fascist tool,
Iowahawk, Ace, and them PowerLine fools.
To my knowledge there's just one man
Who's a real and true American: Charles Darwin!
Maybe Keith Olbermann too...

Well, I fin'ly started thinkin' straight
When I run outa bloggers to investigate.
Couldn't imagine doin' nothin' else,
So now I'm sittin' home investigatin' myself!
Found out Charles Johnson's been makin' me look like a kook....

"Well, I investigated all the blogs in my old sidebar,
But ninety-nine percent of 'em was to the right of Bill Maher!
I banished all them bloggers that I used to link,
'Cause they was about as kosher as Colonel Klink!"

Move over Weird Al, there's a new sheriff in town,
It's Gagdad Bob, and he ain't just a rodeo clown,

He writes the songs that make ya think,
and he does it all with a tail wag and a wink,

Gagdad Bob, superstar,
metaphysics is his game,
he really raises the bar.

Why would the John Birch Society be associated with Hitler? It's like, what does old-school Americanism have to do with right-wing fascism?

The liberals always get it wrong...

"Why would the John Birch Society be associated with Hitler?"

Probably just because they're nuts.

Groove Shark!
Thanks much BabaZee
Never heard of it. Just cued up a few Rolling Stones songs like Mona

As far as LGF -- CJ is reverting back to the mean. His mean at least which was liberal pre-911. He became a national security liberal. All that is gone. His blog is pointless
Just took a look and it's worse than it was six months ago

CJ can safely hang out with his liberal friends now

I should hope so.

Fascism is only right wing to a communist. Why do I have to repeat this over and over. Nazi's were leftists (National Socialist Workers Party). Leftists, like the Democrat Party. The we are killing you for your own good party. Statists, we are from the gov. and we know what's best party.
The pro death party at least for the innocent.

So true. I'm currently reading Hayek's Road to Serfdom, and he was pointing these things out in the 1940s. Liberal is on one end of the spectrum; left is on the other. It couldn't be more obvious.

Yes, I saw the entry where the Powerline guys said they were cleaning up their blogroll. ;) So when is he getting pared from the Politics of Destruction aggregator? It's annoying, seeing those contrary posts off to the left...

Goshdurned it, Bob! When did Iowahawk get banned?

I'm wondering about Iowahawk too. Did CJ just quietly delink him or did he declare in a great self-righteous snit, "We are not amused!"

Well, Iowahawk seems to be doing just fine, although I imagine it was hard for him to get out of bed and dress and feed himself for a while knowing he was one of The Flounced. I mean, imagine what Sharmuta would do if she ever got banned. Life would not be worth living.

"Mona" is one of my favorite Stones songs. I like their Brian Jones-era stuff.

It was on a private thread. You have to be registered to see the comments.
Sharmuta is the one who reported to Charles (and everyone else) that Iowahawk had de-linked LGF, and furthermore, that Iowahawk was logged in.

Dianna rebuked Sharmuta for basically going on a witch hunt and being a snitch, but Charles responded by defending her and stated that all lizards should be defending him from people like Iowahawk.

Sharmuta and Charles then both agreed that Iowahawk's "transgression" was simply another way of saying "fuck off" to Charles, thus the banning.

On the same thread Charles spoke of banning Vanderlein for allegedly dissing him in some way.

I'm sure Mr. Vanderlein is all broken up over that, lol.

Charles has also had several heated disagreements with Buzzsawmonkey and Zombie, who rarely posts comments there anymore.
When they do comment they are now swarmed and sneered at by the vilest of liberals (think kos kids) that Charles has surrounded himself with (assuming that some aren't his sockpuppets).

The crazy is strong with Charles. He hates anything conservative and is obsessed with linking anything conservative to nazis, creationists, IDers, birchers, birthers, paulians, and "anti-choicers" as he calls pro-lifers.
Charles is now like Markos or Andrew Sullivan and there is very little "independent" or "libertarian" about him. He is a leftist through and through, except maybe for his support for Israel.
He has done an about face on everything else, so it's hard to say if he will remain a staunch supporter of Israel.

I feel so good that LGF banned me, almost like I'm some sort of star or something.

Gagdad, voodoo, I just reread that a few months ago

Also sinceI spent a year investigating the new nazis I learned a thing or three about the old
;)

Why would the John Birch Society be associated with Hitler? It's like, what does old-school Americanism have to do with right-wing fascism?

Upthread someone asked this

Because there re factions inthe Birchers that are white power oriented, that hate Jews.

So by the power of MASTERFLATION all Birchers are Nazis

Let me be clear: I didn’t watch the Video Music Awards, so I don’t have all the facts. But Taylor Swift acted stupidly.

Well done! Too bad we can't record this with someone singing and playing the guitar. It would make a great YouTube video.